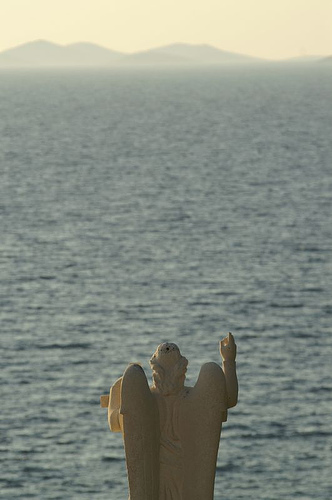 I’m a big fan of visiting cemeteries when I travel, so when I started hiking to the church atop the hill-like town of Primosten in Croatia I was hoping to find some cool, old cemetery – with crumbling and run-down graves and crypts, much like some of the crumbling buildings I’d seen on the way up to the top of the hill. I found a cemetery, all right, but instead of an old one it was new. Still, some of the angels on the graves had lovely views.

On the horizon, you can see the islands of Kornati National Park. In a conversation I had with a tour guide at Krka National Park, I learned that the islands in the Kornati chain have rather interesting names… Stemming from when the Austrians rounded up locals and asked them, “What’s the name of this island?” so they could put it down on a map. The locals weren’t terribly fond of the Austrians taking over, so they gave them false – and dirty – names. The only one the tour guide would translate for me was “Big Hooker.” She said the others were too risque for mixed company.