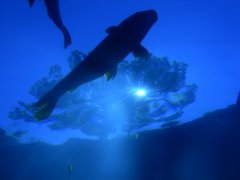 It’s hard to do much sightseeing in Kornati National Park without a boat. The land mass of Kornati Park cover less than 25% of the total area, but that’s OK because the best sights are not on the land anyway.

Kornati is a park devoted to water and islands and the sightseeing on these islands takes place under the water when scuba divers take to the water to see the beautiful reefs and displays of natural aquatic life through the crystal clear water.

Kornati was declared a national monument in the 1980’s after an expansion of its borders led to the inclusion of 89 islands total. The park now contains 220 square kilometers, most of it open ocean. The most popular attraction in Kornati are the “Kornati Crowns” which are sheer white cliffs rising dramatically out of the ocean into the blue sky caused by Africa’s northern tectonic progress and its collision with Europe.

The most interesting part of the Kornati Crowns is the diverse wildlife and varieties of coral and plant life that live above and below the surface of the water. Peregrine falcons, hawks, and swifts patrol the cliffs above; SCUBA divers and fish patrol the water below. Because of the diverse species of wildlife that inhabit the cliffs and the water, rock climbing on the crowns is not allowed, no matter how tempting the rock walls look from the boat.

Kornati Park is located about 7 km from the mainland. The park itself is only 15 km from Zadar and about the same distance from other cities that provide tours. SCUBA diving is only allowed in Kornati Park as part of one of the registered and guided trips that depart from the cities surrounding Kornati.

Although SCUBA diving is by far the most popular activity in Croatia, the park has much to offer the geologically inclined as well. Beside the geomorphic formations that can be found on the sea floor, the Magazinova Skrila formation on the island of Kornat is an interesting place where limestone slid across the surface of other limestone on a massive scale. The cause of this phenomenon is thought to be an earthquake.

The last attraction in Kornati Park is the one least unique to the park itself. The Tureta Fortress is an ancient castle on Kornat island that probably used to serve as a look out and base for military ships that patrolled the approach to a nearby port in ancient times.

Getting to Kornati Park is a challenge if you’re not visiting on one of the registered tours. There are no ferries to the islands because no one lives on them anymore. There are some grass huts that allow boaters to stay overnight if they feel the need to camp without electricity or any of the modern comforts, but otherwise there is no accommodation on any of the islands. For those not interested or not able in renting a yacht to tour the islands, renting sea-kayaks and paddling through the islands is the best option.