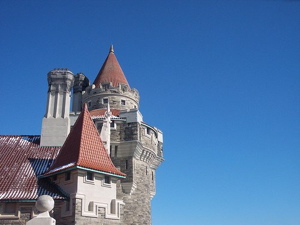 The Trakoscan Castle, an easy day-trip from Zagreb, hearkens back to a simpler time, when people lived in castles instead of just admiring them on vacation and the dungeon wasn’t just for tourists. Trakoscan was an occupied dwelling until the middle of last century and only recently opened to become part of the set of attractions that Zagreb has to offer.

Trakoscan Castle was built in the middle of the 13th century as part of a network of fortifications throughout Croatia. The origin of the name of the castle remains disputed, but it is agreed that it is a Romanesque fortification.

The Draskovic family came into possession of the castle in return for services rendered to King Maximilian in the 16th century. For a few generations the family lived there, then abandoned the estate for a more exciting existence abroad. It wasn’t until the second half of the 18th century, when manor houses and estates became popular in the countryside, that a group of Draskovic’s returned to the castle and restored the interior and gardens to a point that surpassed the former level.

The castle was inhabited until the 1940’s when the remaining Draskovic family members emigrated from Croatia to Austria. The castle is now state owned and the facility is on display for the world to see and tour.

Trakoscan has four main levels, including the dungeon, and each one is a large area to tour and see. The castle has the feel of something that has stopped in time and living there must have required an intense respect for days gone by in order to not upgrade the facilities to include heating systems and other modern amenities. Almost immediately after the Draskovic’s left the Balkans, the government turned the castle into a museum.

The two most notable rooms in the castle are the Knights and the Hunting rooms, which are on display year round, although only from 9 a.m. to 3 p.m. in the summer. The rest of the year, the museum is open and the castle is available for tours from 9 a.m. to 6 p.m.