Croatia: Getting There is Half the Battle 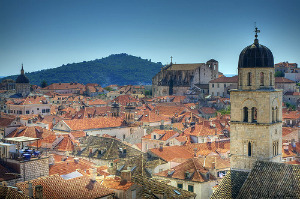 Croatia has been on the tourist radar for some years, but despite the alluring pictures of stunning blue waters, beautiful beaches, and Roman ruins it still hasn’t been completely overrun by people visiting on a European tour. There’s every reason to include Croatia on your next trip to Europe – the great bargains being only one – that it’s frankly a little surprising that more travelers don’t visit Croatia each year.

Of course, European vacationers have been enjoying Croatia’s gorgeous coastline for longer than it’s been called Croatia – this part of the world has been extremely popular as a holiday destination since Roman times (note the proximity of those Roman ruins to great sea views), and now with all the travel deals you can find out there it’s even more appealing if you’re coming from further away.

As mentioned, Croatia is a pretty good bargain for budget travelers, with the many cheap hotels in Croatia and even cheaper hostels, and once you’re in the bigger tourist destinations you’re doing well. But getting around in Croatia is still a little bit of a challenge if you’re used to the great network of rail lines throughout most of Europe. Among the many options for how to get to Croatia from Italy, for instance, the train will only take you so far before you have to switch to a bus or rent yourself a car.

One of the cheaper options these days for getting to Croatia from elsewhere in Europe is simply to fly. If you’re already in Europe you can find excellent deals on cheap flights to cities like Zagreb, Split, and Dubrovnik on carriers like Ryanair, Germanwings, and easyJet. And if you’re coming from outside Europe, your best course of action may be to find the best deal you can on cheap flights to Europe and then look for one of those budget carrier flights from there into Croatia.

Yes, it can be a little more challenging to get to Croatia than it is to get to places like France or Italy, but since the prices once you get there are still so great it’s worth the effort.