Getting from Dubrovnik to Korcula 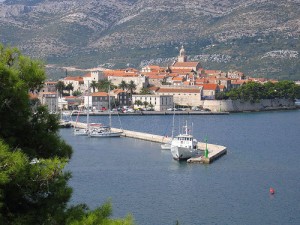 Dubrovnik is located on the Adriatic Sea coast and is a major transportation hub for ferries to/from Italy , as well as domestic ferries. That , of course, aside from being an important travel destination in Croatia, known as the “Pearl of the Adriatic”.

Korcula is the most populated island off the coast of Croatia, located close to Dubrovnik. It is known for the many cycling tracks which can be used year round (thanks to the mild weather).

The cheapest and easiest way to get between Dubrovnik and Korcula is the passenger ferry which sails two times a week during the summer. During the rest of the year, catch a bus from Dubrovnik to Korcula (which includes the ferry crossing).

Ferry from Dubrovnik to Korcula

Jadrolinija runs ferries between Dubrovnik and Korcula two days per week . They operate between end of May and end of October. Ferries depart Dubrovnik on Thursday and Sunday at 8:30 a.m. and arrive in Korcula at 1 p.m. on the same day. On the way back, catch the ferry from Korcula at 1:30 p.m. on Tuesday and Saturday and arrive in Dubrovnik at 6:30 p.m.

To find the price, go to “coastal lines” under Prices on the web site. During the low season, the single adult fare is €12, while during the high season (June 24 to Aug 28) it’s €14. Cabins are also available. You get 20% discount if you get a round trip ticket.

Buses from Dubrovnik to Korcula

Driving from Dubrovnik to Korcula

You can rent a car in Dubrovnik and take the E65 and Route 414 to Korcula. The 119 km also include the Domince (Korcula) – Orebic ferry crossing. The total journey time is about 2 ½ h.