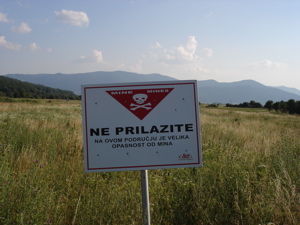 During the Croatian War of Independence, nearly two million land mines were laid down in the countryside by both sides in an effort to shore up their territory. Armies used land mines extensively throughout the former Yugoslavia during the 1990’s to compensate for their lack of infantry. With land mines placed along undefended front lines, fewer men were needed to defend and control territory. That tactic, however, left Croatia with one of the worst mine problems in Europe.

Mines are no longer much of a problem today. There has not been an injury caused by a mine in over a year. Although they do limit the places you can explore on their own, most mined areas have been identified and blockaded from tourists. Meanwhile, a massive education program with signs marking dangerous areas has led to a sharp drop in injuries and casualties over the last several years. The proliferation of signs has caused a bit of a struggle between the Croatian Mine Action Center and Zdenko Mcic, the Croatian minister of tourism, ensues over where to place the 13,000 signs warning of mines. Mcic would like the signs limited to only the places in which mines are present because the signs hurt Croatia’s image, but the program’s success is hard to argue with. Mines killed 101 people from 1998-2006, but there has not been a casualty caused by a mine in Croatia since April 2006.

Most tourist areas never had mines. Although a Dutch traveler lost his leg while walking around an old Army base on the island of Vis four years ago, his has been the only injury from mines reported by a foreign citizen. Most visitors spend their time on Croatia’s coast, where mines were never laid. Military activity was mostly inland, in the eastern “panhandle” of Slavonia and in northern Dalmatia where farms line the countryside and cows are the most common sight to see.

Popular tourist attractions that were mined were the first priority for demining after the war ended. Plitvice Lakes monument in northern Dalmatia was one of the first places to be declared mine-free in 1998.

Current demining operations have limited the possible locations for mines to a 500 sq mile section in Slavonia that is marked and blocked off. 240,000 mines wait to be removed from that area, a process that is scheduled to be completed in 2009 when the entire country of Croatia will be declared mine-free.