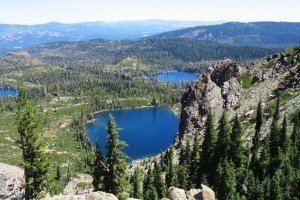 Of all the parks in all of Croatia, Sjeverni Velebit Park is the youngest. Sjeverni Velebit, which translates to mean “northern part of the Velebite mountain chain,” was declared a national park in 1999 by the Croatian government and today hosts many visitors to its walking trails and soaring mountain peaks each year.

The park is also home to the highest meteorological station in Croatia.

The park is 109 square kilometers in size and there are 30 peaks higher than 1300 m tall in Sjeverni Velebit, making it one of the biggest mountain ranges in Croatia. Although most of the park rises up and over Croatia, most of the visitors to the park are interested in going underground, into the caves scattered throughout the mountains. Spelunkers unite at Lukina Jama, the largest cave in the park, which drops 1,392 m into the ground and at the cave system Cerovacke Pecine. Three small caves called upper, middle and lower cave extend between 2,682 m and 390 m down into the ground.

Lukina Jama was only recently discovered by a team of professors and students studying caves on Mt Velebit in 1993. On August 7th, at 9:45, the team reached the bottom of the caves, declaring it the biggest hole in the ground in Croatia and one of the 20 largest caves in the world.

Because Sjeverni Velebit is so new, the park is still not as highly trafficked as some of the other, more famous parks around Croatia. It also does not charge admission or require you to register before your arrival like several of the other tourist-heavy parks in Croatia do. Sjeverni Velebit is one of the few places where you can get away from it all without stumbling upon another group trying to do exactly the same thing.