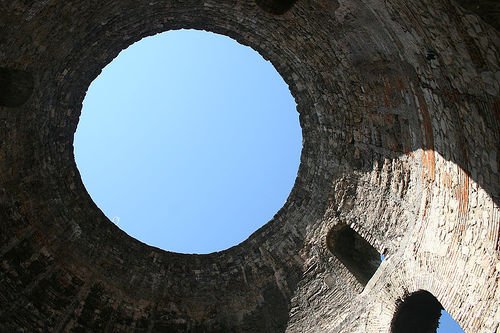 Roman Emperor Diocletian probably didn’t know that building his retirement home on the coast of Croatia would spawn a town that would become one of the most populated and well-known in Croatia. The original structure around which the city of Split blossomed, Diocletian’s Palace is now the center of culture, business and nightlife in Split.

The palace was built between the 3rd and 4th centuries and the location was chosen for its proximity to the white stones on the island of Brac as much as for any of the attributes of the city around it. Brac’s white rocks provided the material out of which Diocletian’s white palace was built. Those same rocks would be exported 14 centuries later, to America, for the construction of the White House in Washington D.C.

Now, Diocletian’s Palace is full of businesses, shops, bars, clubs and Internet cafes. The main bus station and ferry terminal are located directly in front of the palace and it serves as a gathering place for most of the tourists in the city at night.

In 1979, the palace became a UNESCO world-heritage sight based on its merit as an ancient palace that has lasted throughout the centuries and continues to serve an important purpose within the city and community.

There are several landmarks in Diocletian’s Palace that every tourist should see. The statue of Grgur Ninski outside the gates of Diocletian’s palace is one of them. Grgur Ninski defied the Catholic Church and introduced the Croatian language into Church servicesThe famous statue by Ivan Mestrovic is one of the most popular works of art in Split and touching the big toe of the statue is supposed to be a lucky charm for the people passing by. You can see that the foot of the statue is now well worn and rubbed to a shiny bronze by the people passing by each day hoping to improve their fortunes.

With the city of Split having grown around the structure, it can be difficult to tell where it begins. Diocletian’s Palace was not only a castle built for the Emperor of Rome to retire to, but a fortress protecting the people inside as well. The thick outer walls were built to be easily defensible and now the walls serve to separate the palace from the rest of the city. Upon entering Diocletian’s Palace the walls and buildings seem to grow together, as if built on a different scale than the rest of the city, which it was.

If arriving in Split from another part of Croatia, that Diocletian’s palace will most likely be the first thing that you see. If it’s not, it is perhaps the one truly unmissable sight to be sure you see in Split.