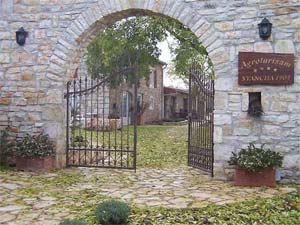 Driving west from Zagreb to the Istrian peninsula is a bit like bidding farewell to a tipsy uncle at a boisterous family gathering as you retreat to the peace of a cottage in the forest. Croatia’s remarkable diversity isn’t reflected only in its food, dialects and microclimates, but also in the distinctive moods that hang in the air of each and every locale. While Zagreb chuckles mischievously behind a deceptive façade of imposing architecture and lingering Austro-Hungarian formality, the soul of Istria whispers dark green aromas of sea mist, pine smoke and herbs from the crisp silence of wooded hills.

The sleepy Istrian village of Smoljanci exemplifies such serenity. While it’s a bit of a trek from Zagreb, it’s only a short drive from the fairytale city of Rovinj. Tourism is not highly developed in Smoljanci, but if you’re up for some classic Istrian cooking with local wine and brandy, the rolling estate at Stancija 1904 is worth the extra coin for a night or two.

Stancija 1904 is an idyllic agroturizam getaway tucked back from the rest of the world. ‘Agroturizam’ means simply that the accommodations and dining of a tourist property emphasize natural, traditional and home style offerings rather than the glitz and champagne of large hotels. While getting to Smoljanci entails navigating a maze of two-lane roads flanked by ancient stone fences, the estate’s website offers what are arguably the clearest, most accurate driving directions ever given in Croatian history. The adventurous will enjoy the ride through the Istrian countryside, and Stancija 1904 is worth the trip. 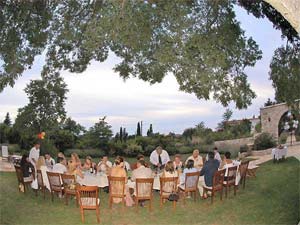 When you arrive in Smoljanci, the first full breath of pure Istrian air will reach into every cell of your being, confirming that you’re no longer in Zagreb. At night the only sounds audible on the sprawling estate are those of frogs and the massive boughs of Stancija’s ancient oak, creaking and groaning under the wind. Upon entering the resort’s rustic stone dining hall, you’ll be greeted in the traditional fashion with krostule – a crisp, fried pastry dusted with powdered sugar – and a snifter of superb, locally distilled herb brandy to whet the appetite. Chef and proprietor Drazenka Moll will be busy in the wood-fueled outdoor kitchen putting the final touches on your supper, concocted entirely from local, seasonal ingredients.

Notable elements of Stancija’s multi-course supper may include fresh, homemade goat cheese with nettles, a salad of arugula and wild strawberries, or handmade pasta with crabs and mixed seafood. But it’s the local Istrian wine that might make the most indelible impression, transporting you to an entirely new world of oenophilia. Among other notables in the cellar, Stancija’s wine list boasts an Istrian Teran with remarkable herb flavors.

All told, the expertly prepared food, exquisite wine and quiet, fire-lit ambience will combine to make your stay night memorable. If it’s the mystical serenity of Istria you seek, you’ll find it in the village of Smoljanci. You can check them out at the official Stancija 1904 site.

John J. Goddard is an independent writer and veteran culinary professional. He has lived in Zagreb and on the Dalmatian coast, and travelled extensively throughout the republic. John is currently at work on a Dalmatian cookbook and operates DalmatianCooking.com.