When is a mansion not a mansion? When it’s a Hong Kong hostel. 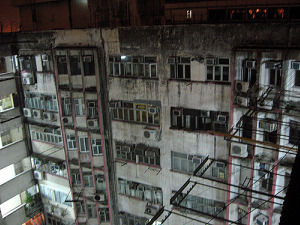 Y’know how so many hostels in historic areas like to brag about they’re in such-and-such old building that’s been “lovingly refurbished” to bring out all its historic qualities while at the same time providing you with all the modern conveniences? I’m sure that those descriptions are often true, and I’d be charmed by those buildings and how lovingly they were refurbished – but after seeing what passes for a “mansion” in Hong Kong, I’m reading about hostels much more carefully.

See, there are these gigantic apartment buildings in central Hong Kong which have been partitioned into hostels, shops, restaurants, offices, and guest houses – and which are, if you believe the lettering on their facades, “mansions.” The two biggies are the Chungking Mansions building and the Mirador Mansions building, both on Nathan Road and both a far cry from what anyone might call a mansion.

The Hong Kong hostels which occupy these so-called mansions are famous for being some of the cheapest places to stay in the city, but they’re also notoriously small and previous guests often complain about the lack of overall cleanliness. But thousands of people still stay in these mansion buildings every single year, maybe because they really are super cheap or because it’s some kind of backpacker rite of passage.

The reality is that some of the hostels and guest houses in the Hong Kong mansions are better than others, and the location on Nathan Road is pretty fabulous, so it’s not a good idea to lump them all together just because they share an address. If you’re looking for a cheap bed, don’t overlook the hostels in the so-called “mansions” – just make sure you do a little extra research before you book, so you’re more confident that you’re staying in one of the nicer ones.

Here’s a little information about the two “mansion” bulidings that have hostels in Hong Kong.

Location of Mansions in Hong Kong 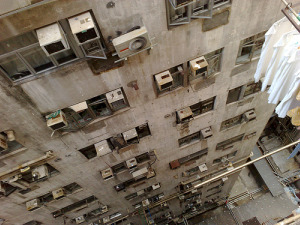 The Chungking Mansions building and Mirador Mansions building are on Nathan Road in the Tsim Sha Tsui neighborhood of Hong Kong. The area is well-known for its great nightlife scene, it’s only a short walk from the ferry that will take you over to Hong Kong Island, and it’s also very close to two MTR stations so you’ll be able to get around the city easily.

The two mansions buildings in Hong Kong are about a block apart on Nathan Road, so you don’t have to choose between them simply based on location. The decision, rather, is between a mansion building and a hostel in an entirely different part of the city. 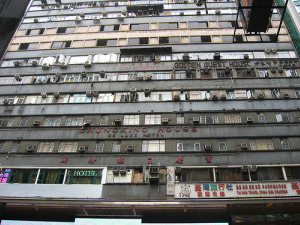 According to our friends over at Wikipedia, the Chungking Mansions building has the most guest houses contained in one building in the entire city, with a total of 1980 rooms available for rent. But despite the huge number of guesthouses and hostels taking up space in the building, there’s still room left over for shops, restaurants, and offices.

The most visible shops are the ones on the ground floor and open to the street, but there are more retail spaces and plenty of restaurants inside the building on some of the lower floors. The building attracts budget-conscious travelers as well as Hong Kong residents – many of the restaurants and shops are aimed squarely at the city’s immigrant populations, with cuisines from all over the world, money exchange offices, and import/export businesses. 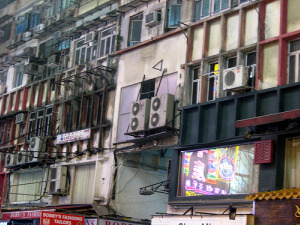 The Mirador Mansions building is, in most ways, essentially a carbon copy of the Chungking Mansions building. They’re a stone’s throw from one another, they both are huge buildings, and they’re both chock-full of a combination of hostels, guest houses, offices, restaurants, and shops.

If there’s a difference, it’s that the Mirador Mansions building is slightly less famous – which can make it a little quieter if you’re looking to stay the night and not just shop or walk around inside to see what the fuss is all about. Mirador Mansion has less in the way of businesses like shops and restaurants, which also contributes to the overall quieter feel.

What to Expect in Hong Kong’s Mansion Buildings 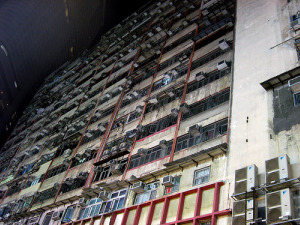 As mentioned, these buildings house much more than hostels. You’ll find restaurants, shops, offices, money exchangers, and other kinds of businesses. Many of them are aimed at (or run by) immigrants, which means you’ll find lots of different ethnicities represented in the foods available (always fun for a traveler).

You’ll read about the elevators in these buildings, which are famous in their own right. Why? Because lines to use the elevators are often long, which also leads to the elevators themselves being extremely crowded. Those with claustrophobia should probably find another way up and down. Because the Mirador Mansions building is a bit less busy, the lines for the elevators tend to be a little shorter.

Hostels and guest houses in the mansion buildings usually have very small rooms to offer (hostels in Hong Kong, no matter where they are, often have small rooms – so this isn’t unique to the mansions) and even smaller bathrooms. This isn’t the kind of place you want to stay if you’re hoping to relax or lounge about in your room while on vacation – but it’s ideal for backpackers or other budget travelers who reason that they’re only in their rooms to sleep, anyway.

Safety of Hostels in Mansion Buildings in Hong Kong 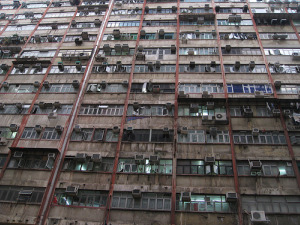 Both of the mansion buildings in Hong Kong have a bad rep when it comes to safety, and that goes for the hostels and guest houses inside as well as the retail spaces and the area around the buildings. Some of that reputation is a bit undeserved, as the buildings and the neighborhood are much better than they used to be, but it’s still a good idea to keep your wits about you if you’re staying in one of the hostels in these buildings.

Hostels and guest houses in both buildings will proudly promote their 24-hour CCTV coverage or the fact that their front desk is staffed at all hours, and those things are definitely good when it comes to safety. But both of these buildings are old, and you should absolutely not consider your locked room door a trustworthy deterrent. In other words, don’t leave anything particularly valuable in your room when you’re not there.

You may read reports of the tourist who was trapped and killed when a fire broke out in the Chungking Mansions in 1988, or how the electricity went out because the system gets overloaded. The former isn’t something that happens regularly, and the latter happens much less frequently than it used to thanks to an outcry from residents in the early 1990s after a particularly long outage.

The bottom line is that while there are undoubtedly safer parts of Hong Kong to stay in, the Nathan Road mansions are no longer inherently unsafe – especially if you’re a savvy traveler who’s used to staying aware wherever you go.