What to Eat in Peru: Famous Peruvian Foods

Peru has exploded onto the scene as the gastronomic capital of South America. Famous chefs and 5 star restaurants in Lima have certainly lent a hand to bringing this diverse cuisine to light, and the best part of enjoying a meal in Peru is you’re sure to never eat the same thing twice. Peruvians highly treasure the pachamama (mother earth), and they devote special meals to her and give thanks for the blessings and fertile land she’s bestowed upon them. And what a fertile land it is.

From the Pacific coasts to the highlands of the Andes, Peru has the opportunity to shine through its array of flavorful dishes and insane amount of produce available. The variety of natural resources and the cultural mixture of nationalities that have inspired it’s cuisine allow Peru to showcase everything from wild fish directly from the heart of the Amazon to the down to earth eateries serving up Chifa, the Peruvian-Chinese fusion cuisine that some would argue is better than if it came from China itself.

Every region in Peru has its distinctive meals- the coastal dishes of the Pacific burst with heat from Peru’s famous aji (chili) in its ceviche, which is a seafood lover’s dream dish. The central coast including Lima has some impressive restaurants and more impressive street stalls to choose your meals from. The food in the Andes or the Amazon won’t be the same eaten anywhere else in Peru. Head to the central Peruvian Andes to witness a Pachamanca, a traditional dish with hot stones heated and piled around the whole meal which is cooked entirely on the ground. This is the beauty of the Peruvian cuisine, its rich diversity.

The list of popular Peruvian dishes is quite endless but it’s been narrowed down to these, make sure you try them on your next visit. 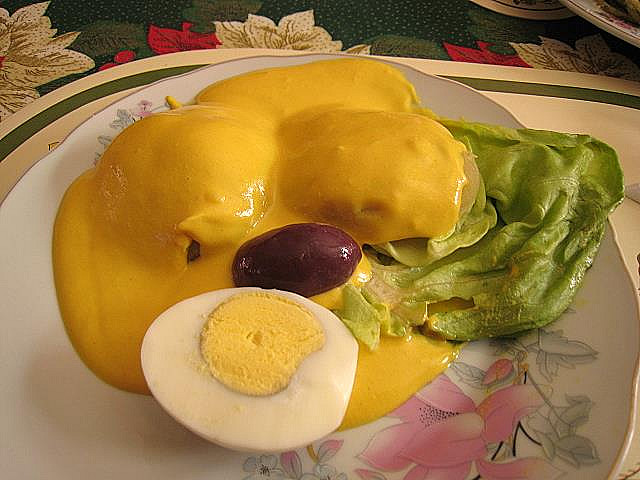 A typical Creole dish, this is a starter course made with boiled potato. The potato is cut into wheels and is accompanied by a cream sauce (Huancaina) made with a base of artisanal cheese called queso fresco, yellow aji (pepper) which is native to this region, and oil. It’s usually served on a plate of lettuce with boiled egg and a few olives. A variation to this sauce is to add peanuts, which changes the flavor slightly-this is called Ocopa sauce.

Where to find the best Huancaina sauce? I have noticed that this dish is either best enjoyed cooked with locals at a private residence or enjoyed at a proper restaurant. It is not a typical street dish and sometimes can be hard to find, surprisingly. 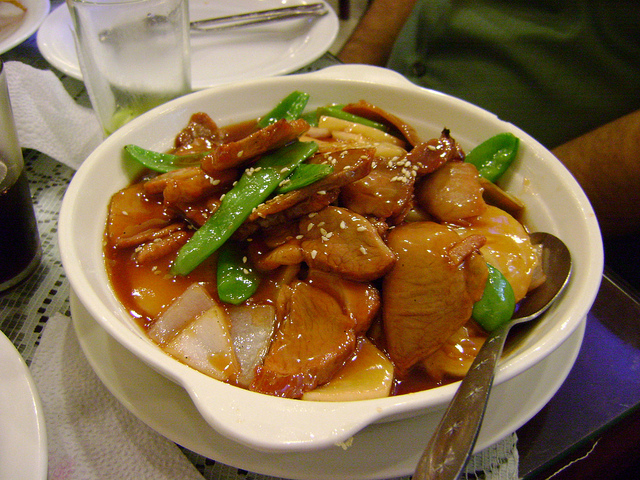 The strong Chinese influence in Peruvian cuisine is due to the arrival of the Chinese laborers in the 1850’s who came to work in the silver mines and in guano pits , sugar, and cotton fields, and whom later stayed, infusing a style of cuisine that is still found all over the country and called Chifa. There are dozens of Chifa restaurants with a variety of fusion dishes, a particular favorite being the sweet and sour chicken, always made with fresh pineapple and accompanied with white rice.

Where to find the best Chifa? Lima has a great Chinatown district where you can choose from any number of Chifa eateries. Opinions vary, but decent Chifa spots can be found in Cusco with a personal favorite Chifa location being in Puno. 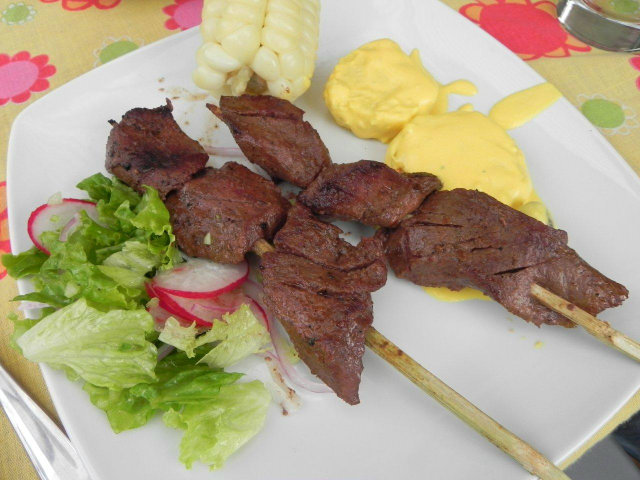 Another plate eaten as an appetizer, antichuchos are popular and inexpensive. Composed of small pieces of grilled skewered meat and marinated in vinegar, salt, pepper, cumin, garlic and onions, antichuchos go all the way back to the 16th century in origin in Peru. While this dish can be made with any type of meat, the most popular parts are the beef heart. Look for any street cart to be grilling this dish up along with a side of boiled potato.

Where to find the best Antichuchos? In Lima it’s best to search for a populated street cart or a few restaurants in the Barranco district serve up tasty sticks of antichuchos. 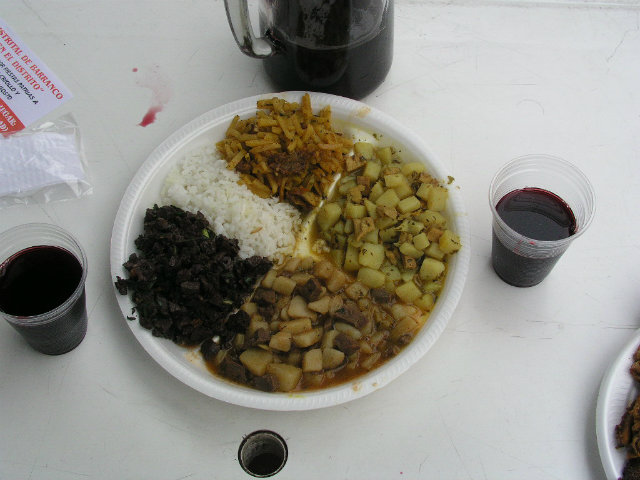 Main course served with rice. Created with potatoes and Mondongo (tripe) stew and sometimes accompanied with peas and carrots. This Creole dish is seasoned with onions, garlic, yellow aji (long pepper), and a pinch of turmeric and garnished with mint.

Where to find the best Cau Cau? Scope out back end Creole restaurants for the best home made Cau Cau. Ask the locals where they’re eating it lately since good locations can change from year to year. 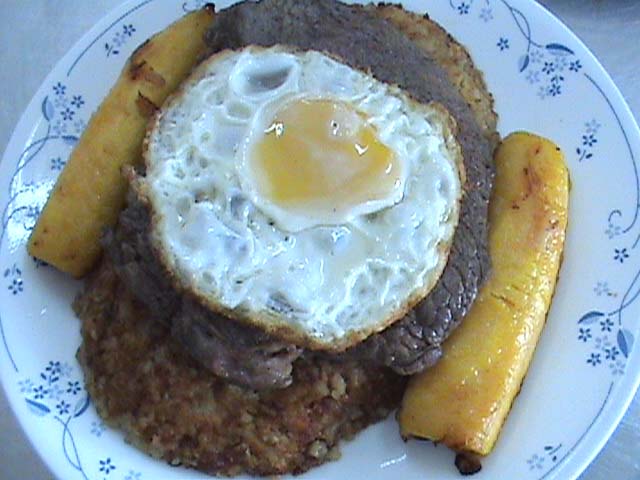 Originally prepared as a leftover dish by Afro-Peruvians, this filling main dish is simple and easy, with a base of rice and beans fried together and usually topped with a thin steak and a fried egg, although it can also come with another side of fried sweet plantains (banana).

Where to find the best Tacu Tacu? Lima and the surrounding areas as well as many cevicherias, since this dish is sometimes served with seafood when adding the rice and beans. 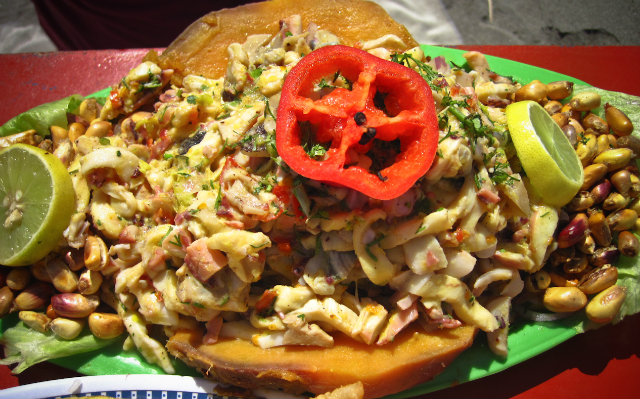 The most famous of Peruvian dishes, this commonly known dish is usually raw fish chopped and marinated with limes, onions, tomatoes, and served cold with sweet potato or corn. Another variation is created with the black clam from the north and gets its color from the tint of the clam. Anytime you’re craving ceviche, head to a coastal town like Trujillo or even Mollendo.

Where to find the best Ceviche? Any coastal town such as Trujillo, Mollendo, Chiclayo, or Piura. If you can see the ocean from where you’re at, chances are you’ll be getting the freshest seafood for your ceviche dish. 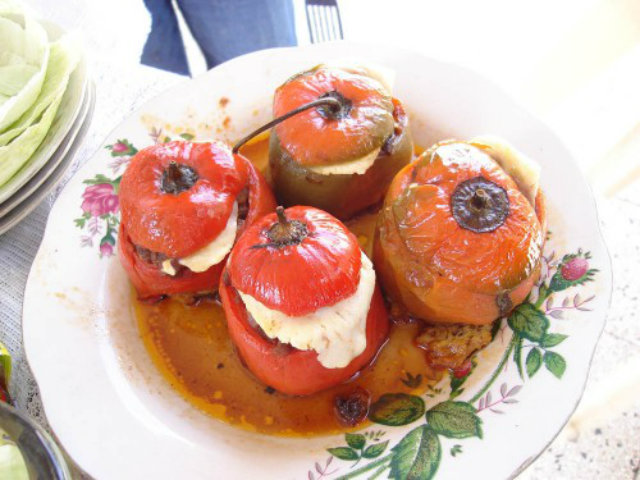 A spicy appetizer dish with Rocoto being the type of pepper and relleno meaning stuffed. The spicy pepper is hollowed out and stuffed with meat, pork, or seafood, and is usually finished off in the oven. The rocoto pepper is one of the spiciest in Peru so it will definitely leave your lips tingling!

Where to find the best Rocoto Relleno? Sources say the place to go for this spicy pepper dish is Arequipa. 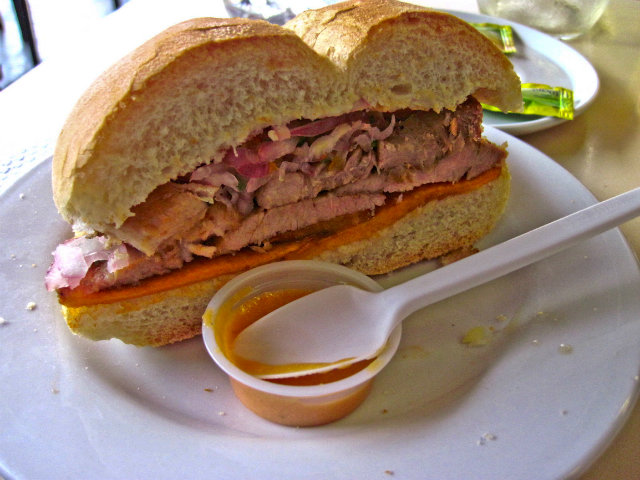 This sandwich is delicious on freshly baked bread. Fried thin chunks of pork topped with slices of sweet potato and red onion typically served with spicy sauces made with aji. I’ve had the best pan con chicharrones in Lima.

Where to find the best Pan con chicharron? Several spots in Lima serve this dish; look for any restaurant or smaller establishment that has pork visibly cooking. If it’s full of Peruvians, you’ve come to a good spot. In Lima, the Parque Kennedy has a sandwich joint that’s been around for years, and it’s always full. 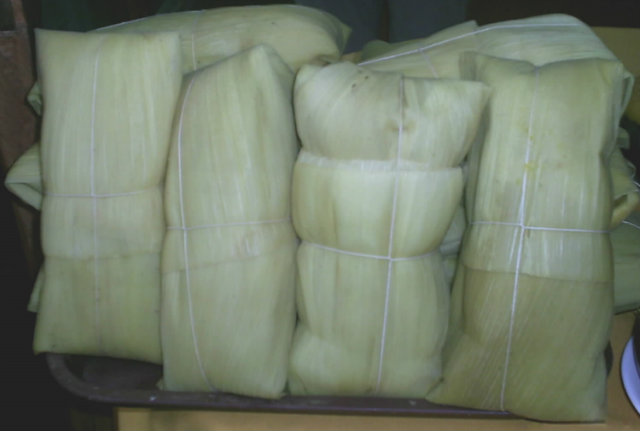 A cousin of the tamale, this is made with a white corn base. Peruvian women will climb on buses selling these treats early morning, asking if you’d like salty or sweet- as the two versions differ. One is corn with a pork filling and the sweet version is filled with raisins or cheese. Super cheap, buy 2 or 3 of each and you’ve got a great snack.

Where to find the best Humitas? The best Humitas will be the ones you’ll get from any street vendor first thing in the morning. As long as the basket is steaming you’ll know they’re nice and hot, which is the best way to enjoy them. 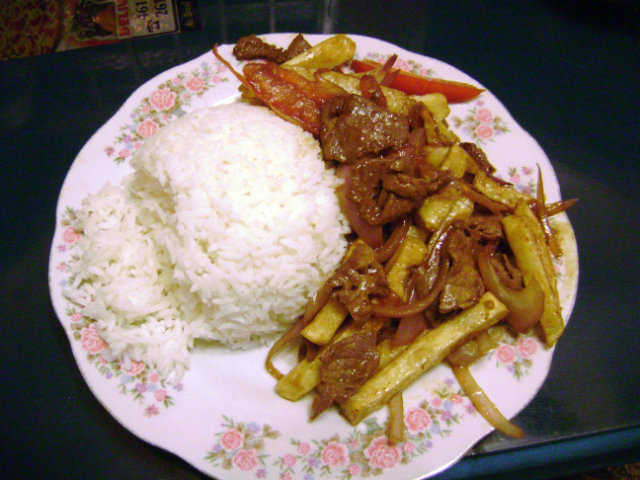 For most visitors to Peru, this might very well be their first dish. As well as being the most well known besides ceviche, this dish is served just about everywhere! A stir fry, this meat dish is created with spices and onions, tomatoes, soy sauce and vinegar and comes served with both white rice and French fries.

Where to find the best Lomo Saltado? Since this is one of the most popular dishes from Peru, it’s likely on any restaurant menu. Smaller restaurants also serve this dish, in particular in Cusco I know it’s on a few breakfast menus as well. Affordable and filling, best enjoyed with a cup of coca tea in the morning or a Cusquena beer in the evening. 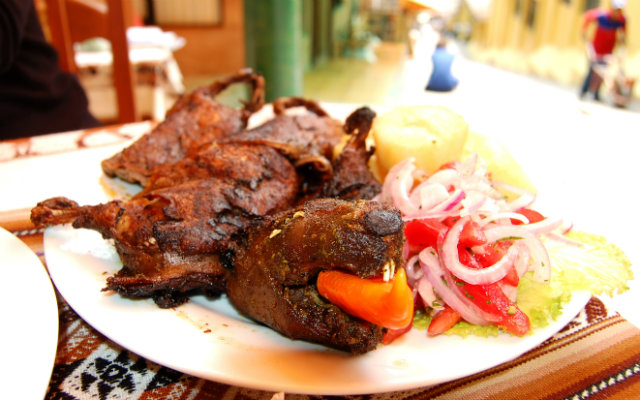 Fried guinea pig might not be for everyone, but a dish of guinea pig can be served with meat only or you can also order it whole, and grab the little leg to get a good bite. Make sure the skin is nice and crispy for the best flavor.

Where to find the best Cuy? Since cuy has such a distinct taste, you should ask around for a locals’ opinion in whichever town you’re in to see who is making the best Cuy. Tourist restaurants always have it on the menu, particularly in the bigger cities of Arequipa, Cusco, or Lima. 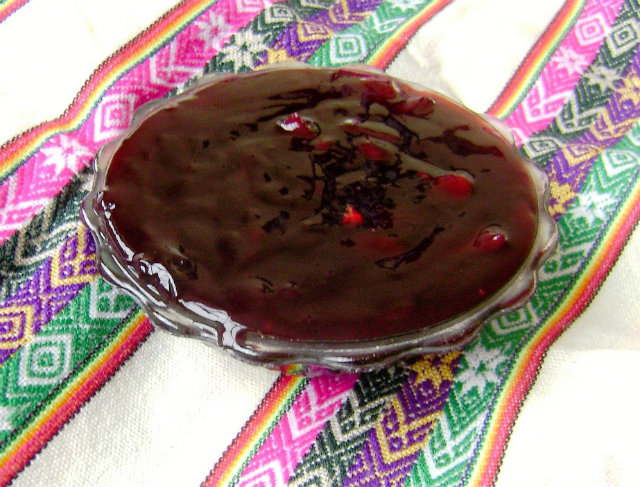 A corn pudding purple in color and best tasted at the house of a local, this after dinner treat is prepared first with the base of purple corn boiled with water (chicha), when this is ready you can add dehydrated ground potato and chunks of pineapple, raisins, and a stick of cinnamon or cloves.

Where to find the best Masamorra Morada? Again this is one of those dishes that you’d be lucky to enjoy with your new Peruvian friends with grandma cooking it up right, since this is where you’ll find the best tasting puddings. It is a typical Limenan dessert so a good place to enjoy it might be in Lima. 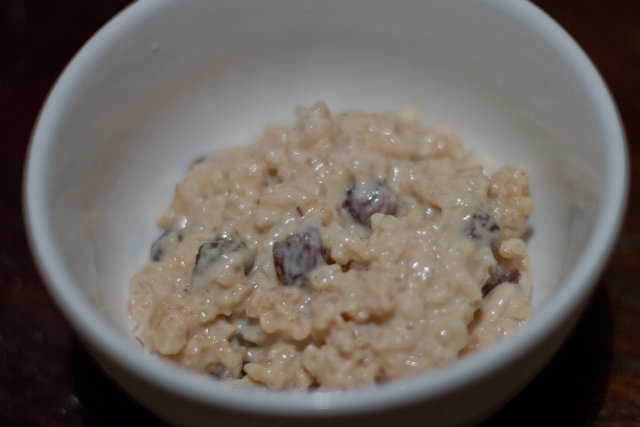 Tradional rice pudding, easy to make and can be eaten cold or hot. Boiled cooked rice gets cinnamon, cloves, and sweetened condensed milk mixed in with raisins for a sweet treat. This dessert can also be topped with orange shavings.

Where to find the best Arroz con leche? I hate to give Lima all the credit, because I’m sure you can find it in any town with a bit of searching. If you’ve got a sweet tooth, chances are you’ll find a place to satisfy it wherever you may be.

photo credits: Papa a la Huancaina by morrissey, Chifa by Pablo Matamoros, Antichuchos by HugoMon, Cau Cau by Xauxa, Tacu Tacu by La Cocina de Bender, Rocoto Relleno by James Ulysses, Humitas by Daniel Norero, Lomo Saltado by Dtarazona, Cuy by rebeccaypedro, Masamorra Morada by Dtarazona – remainder by the author (and may not be used without permission)