Want to sleep during your vacation? Choose your Dublin hostel carefully. 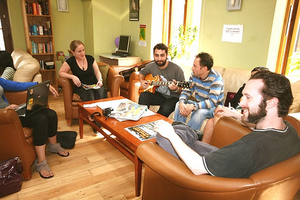 Dublin is one of those places that’s ideal for a weekend city break from continental Europe, which makes it an incredibly popular destination for things like hen and stag parties. But even without those out-of-town partyers arriving to celebrate one person’s last moments of pre-married life, the city is notorious for its raucous Temple Bar area where revelers are enjoying themselves (loudly) well into the wee hours.

As you can imagine, there are many hostels in or near Temple Bar to accommodate those party-goers who don’t want to have too far to stumble from their last pint to their pillow. But Ireland’s capital is about more than just partying, so if you’d like your trip to include more than just Dublin’s nightlife (or not include the nightlife at all) but you’re still on a budget, there are other parts of the city where you can find hostels. And that’s a good thing, because Dublin is not a cheap city to visit – so saving money on your bed is the first step to making it an affordable holiday.

About the Temple Bar Area

Why am I including a section about Temple Bar in this article when I’ve already said you probably won’t want to stay here if you’re hoping to sleep at night? Because rather than just being party-central, Temple Bar is an interesting historic quarter of Dublin where you’ll definitely want to spend at least part of your stay in the city – just perhaps not late at night.

In addition to the many cozy pubs that line the cobbled streets of Temple Bar, it’s in this part of Dublin where you’ll find the headquarters for several cultural institutions. It’s a lively section of Dublin no matter the time of day, but it certainly is more famous for its boistrous nights.

Interestingly, although Dublin has been a popular city break destination for years, and has attracted plenty of hen and stag parties, local authorities did make an effort to clean up Temple Bar’s image a bit by banning stag and hen parties in 1999. Anyone walking through the area at night these days, however, will see that the ban is either very loosely enforced or ignored altogether.

While there are cheap beds in the hostels right in Temple Bar, there are also hostels in Dublin that aren’t in the heart of the city’s nightlife. So if you’d like your trip to Dublin to include some shut-eye, or you’d just prefer not to have to dodge crowds of drunk partyers on the way to your hostel’s front door, then I’d suggest you focus your search for hostels on areas that don’t emphasize how close they are to Temple Bar. A few hostels outside Temple Bar are listed below.

Jacob’s Inn Hostel is 10 minutes on foot from Temple Bar but still in Dublin’s city center, so you’ll get all the benefits of being in downtown Dublin without being right in the middle of the loudest nightlife center. Even the dorm rooms at Jacob’s Inn have en suite bathrooms, and guests get special meal discounts at the sister hostel, Isaac’s Hostel, which is also downtown.

Dublin International Hostel is part of Ireland’s Youth Hostel Association (An Oige), and it’s located about 15 minutes walking distance from Temple Bar. So it’s close enough where you can linger in the area to have one last pint, but not close enough so that you’ll be listening to the drunks as you’re trying to sleep. And if you needed any further proof that this place isn’t all about the party, the hostel’s garden includes a play area for children traveling with their families.

Harrington House Hostel is a 20-minute walk from Temple Bar in downtown Dublin and also within walking distance of many of the city’s main sights. If it feels a bit too far to go on foot, however, there’s a bus stop right outside the hostel’s front door that’ll take you just about anywhere in the city you want to go. Even the airport-bound bus stops in front of the hostel.