The easiest way to LAX 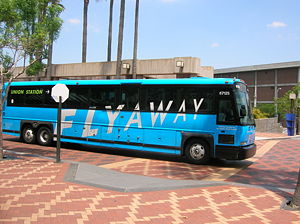 Depending on where you live, picking someone up at LAX ranges from a minor inconvenience to a major problem. Unless you’re extremely local, like El Segundo or Manhattan Beach, the prospect of getting to the airport means that you’ll spend a bunch of time sitting on the freeway probably during rush hour, and you’ll have to dodge in and out of traffic and figure out which terminal you’re supposed to be near.

The new FlyAway bus from LAX to Union Station solves all those logistical problems and might even save a friendship or two. The bus runs from Union Station to LAX every half hour and the return trip runs just as often. In the wee hours of the morning the frequency slows to once every hour.

The FlyAway bus costs $4, but if you’ve just arrived on a flight, the service is free from LAX to Union Station. The driver usually checks your baggage claim to determine if you are worthy of a free seat.

There is another FlyAway bus from Westwood, at the campus of UCLA, that also runs every half hour. It shuts down from 1 a.m. to 5 a.m. however.

The FlyAway bus picks up passengers from LAX under the green “Long Distance Vans” signs. There is one at every terminal and the bus stops at each one. The bus is Blue with a giant graphic reading “Fly Away” painted on the side. With the ease of identification and the fact that there are only two stops on the route, this may be one of the easiest and most effective public transportation routes in the city.

From Union Station, passengers can get quite close to most neighborhoods north of Orange County by taking one of the rail lines from the station. Union Station is also an easier drive to get to if someone is picking you up despite its location in downtown.