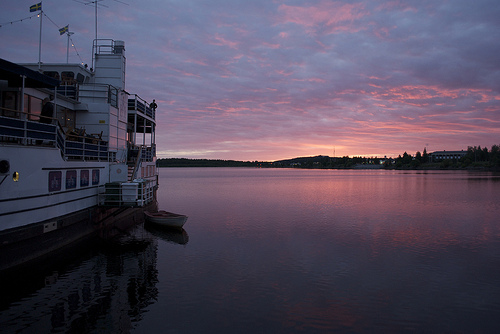 Summer is the most popular time to visit Sweden, thanks to the warm temperatures. Early summer – including July – is famous for the natural phenomenon known as the Midnight Sun, the reason for which both locals and travelers visit Northern Sweden. You can also plan to do some sightseeing in the cities, explore nature or try your luck at various sports.

Sweden’s climate is hard to classify because it is influenced by the Gulf Stream. The country has a lot of sunny days but it never gets hot in the summer. July is the warmest month , making summer – June to August – the best time to visit the country.

The cafes, most attractions and museums are open. However, the major cultural venues are closed during summer, unless there’s a festival or special event. Most locals and tourists flock to the north of Sweden to see the Midnight Sun. It is the exact opposite of the Polar Nights – known also as Polar Days – and they only occur in early summer (May to July). Even in the South, daylight can last until 11 p.m. and the sun rises around 3 a.m. Although the daylight lasts almost through the night, it’s not as warm as during midday, so bring a sweater.

>>read more about Weather in Sweden

Summer – and July makes no exception – is the most expensive time to fly to Sweden. It’s high season and finding an affordable flight is impossible. To compensate, hotels have some discounts now. Do make sure to book the flights and accommodation in advance.

Summer is the time when locals abandon the cities and go to the countryside to relax and reconnect with nature (at least for a week). If you don’t like crowds , now it’s the time to visit the cities. However, certain cultural venues might be closed unless there’s a festival or special event taking place.

The things to do in Stockholm include exploring the Old Town , watching the changing of the guard and spending time in nature. You can also plan a day trip to the islands of the Stockholm Archipelago or enjoy the two city beaches.

But the reason travelers come to Sweden in early summer is the Midnight Sun. Also known as Polar Days, the natural phenomenon is the exact opposite of the Polar Nights. The further north you go, the shorter the nights are and in some places the sun never sets (for up to 6 weeks). Even in the south part of Sweden, the suns sets around 11 p.m. only to rise again at 3 a.m. In early July, head to Bjoürkliden, Abisko, Kiruna or Gällivare to catch a glimpse of this phenomenon. All these places can be easily reached by public transportation.

You can take a scenic ride on the Lapland train , which runs from Malmö in Sweden to Narvik in Norway. It takes you across the Arctic Circle so you can experience the Midnight Sun. The single fare for the entire length of the journey is 799 SEK / €90. Youth (under 26) and pensioners get 15% discount. Interrail and Eurail cards are valid for travel on the Lapland train.

Summer is also the best time to enjoy nature and participate in activities such as: fishing, hiking, diving, biking, golfing, scenic train or boat trips , horse riding or trying water sports. Camping in one of the national parks is a lovely way to experience nature.