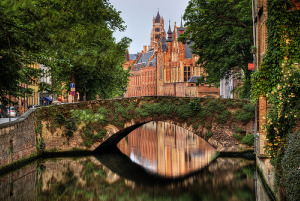 The economic news hasn’t been at all rosy for awhile now. For some people, this has meant cutting back on already painfully short vacations. Some have even eliminated trips entirely in the last couple of years. (Remember the dreaded “staycation?”) Anyone who considers travel a luxury, or who books package tours through travel agents because they don’t have time (or don’t know how) to do their own travel research, probably has written off taking a trip to Europe anytime soon because it’s a notoriously expensive destination.

But for those of you who need to get on the road and are used to traveling on a modest budget, maybe the economic downturn is just another excuse to get creative money-wise. And if you know anything about traveling in Europe, you’ll know that there are some very easy ways to visit the continent on a budget.

Go to Europe in the Off-Season

It goes without saying that if you visit a destination during its slower tourist season, you’ll save money. Why? Because with fewer tourists in town opening their wallets, hotel operators, airlines, and others in the travel industry drop their prices to entice more people to come and spend money. The slow season is, therefore, the perfect time to travel if you’re on a budget.

In Europe, there doesn’t seem to be as much of an off-season as there is in some other places, since cities like Paris, London, and Rome tend to be pretty busy year-round – but there are definitely certain times of the year when not only are the crowds smaller but the prices are lower, too.

The slow season in Europe varies a little by country, mainly because of the weather. In northern Europe, for instance, the colder winters tend to keep more tourists away than the milder climate of winter in Mediterranean countries. In general, however, you can count on the cost of a trip to Europe dropping after September and staying relatively low until March. There may be spikes around popular holidays, but winter in Europe is typically a pretty inexpensive time to visit.

Stay in Hostels in Europe

Smart travelers know that accommodation can eat up a good chunk of your travel budget, so it’s important to plan where you’re going to stay carefully. Anyone who’s traveled on a shoestring in the past knows that the word “hostel” usually weighs lightly on the wallet – and lucky for you, there are lots of hostels in Europe.

To be sure, there are hostels in countries all over the world, but nowhere else is there such a concentration of truly budget-focused places to stay than in Europe. You’ll find inexpensive hostel beds in cities big and small all over Europe, and while you might pay more for a hostel bed in Rome or London than you would in Lisbon or Zagreb, you’ll still be saving loads of money over even a 1-star hotel in those cities.

Not only that, hostellers know that staying in a hostel is an ideal way to meet with other budget-minded travelers – people with whom you can shop for dinner ingredients at the local market and save money by cooking up a communal feast. You might even meet up with other travelers interested in doing a guided tour you’re interested in as well, where you could negotiate a group rate and save money that way, too.

And keep in mind that with so many hostels having private rooms nowadays, you could get the privacy of your own bedroom (still might have to share a bathroom, but not always) at a nightly rate that’s still cheaper than a dive-y hotel.