Seeking Out Celebrity in Italy 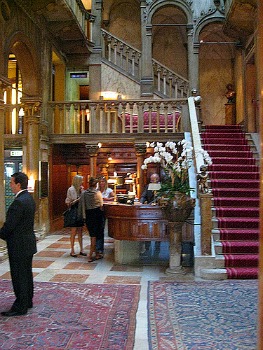 When we are surrounded by something all the time, it loses its allure – even if it’s something that’s supposed to be enticing. The rest of the world might shriek when they see celebrities walking down the street, but in LA? That would be a lot of shrieking. Angelenos are famously unflappable when it comes to celebrity, and with good reason. But what about when LA residents go on vacation?

Popular wisdom holds that we become different people when we travel – we lose inhibitions, we try things we would ordinarily shun, and we indulge in things we might call guilty pleasures back home. In other words, when LA residents go on holiday to Italy, there’s no reason not to get a bit giddy should you come upon any of the places where movies were shot.

Who among us, no matter how jaded, can avoid the comparison with “La Dolce Vita” upon seeing the Trevi Fountain? Or think of “Roman Holiday” when sticking our own hand into the Mouth of Truth? It should be no different, then, seeing any of the movie hotels in Italy, getting a peek at rooms or grand hotel lobbies where famous scenes were filmed.

Some of the more famous movie hotels may be out of reach of the average traveler, but that doesn’t mean you can’t look at them from the outside and recall what parts of the movie were filmed there. For instance, there really is a gorgeous room in Venice’s Hotel Danieli where Angelina Jolie left Johnny Depp sleeping on the sofa in “The Tourist.” The stunning Positano hotel in the film “Only You” starring Marisa Tomei and Robert Downey Jr. is Le Sirenuse, and it remains a boutique budget-buster to this day.

One movie hotel you might actually be able to afford is the Hotel degli Orafi in Florence, made famous by the 1985 movie “A Room With a View.” As you might imagine, some of the rooms in the hotel overlook the Arno River – but (and this won’t surprise you if you’ve seen the movie) some of the rooms don’t have river views. In other words, if re-living the movie is your top priority, book room 414 or another of the rooms on the river-side of the building.

Tempted? Book cheap tickets to Florence and find out what your itinerary could look like if you were spending 4 days in Florence.