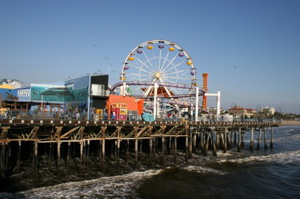 One of the original and most established beach communities in Los Angeles, Santa Monica is the home of surf-culture and skateboarding, a la “Dogtown” and has taken in a growing number of hipsters and progressive thinkers who have migrated toward the coast.

Santa Monica is directly west of downtown Los Angeles and the tall buildings of its downtown area can often be seen looking toward the ocean from the hills behind the city. Santa Monica is home to a number of attractions that bring tourists from around the world.

The Santa Monica Pier is a famous landmark near the coast and its arching entrance can be seen representing the entire city in many places. The pier itself is home to an amusement park and a few restaurants, as well as many fisherman who cast lines off the back end at night for herring and other small fish.

Even more than the arching entrance, the ferris wheel on the Santa Monica is a symbol of the city and for all of greater Los Angeles.

The Third Street Promenade in Santa Monica is a walking street running on Third Street that has become so popular that many of the other beach communities in Los Angeles have tried to emulate its success in bringing people to the city. Streets are being temporarily closed off on weekend and high traffic nights and live music acts flock to try to earn the tips and spare change of the passerby.

The Promenade is best experienced at night, after dark, when its own stable of street performers interacts with tourists and shoppers. When white lights turn on in the trees and live music can be heard.

The beach at Santa Monica is north of Venice Beach, closer to the less-polluted beaches in Malibu and the water clarity and crowds the beaches draws reflects that location.

Santa Monica Beach is also connected to the bike path that famously runs all the way down the beach through the major beach cities. Riding on “The Strand” as it’s known is a great activity for seeing the beaches up and down the coast of the city, internalizing the differences between places like Santa Monica, Venice and Manhattan Beaches, and people watching as you ride or skate along the pathway.