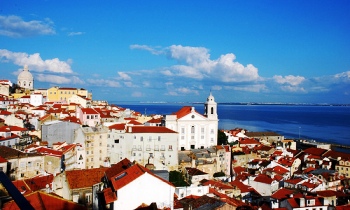 The two countries, Portugal and Spain, share the Iberian Peninsula and although they don’t share the language, it’s easy to mix both of them in your travel itinerary. Lisbon , Portugal’s capital, is famous for its nightlife, architecture and gambling industry, while Madrid , Spain’s capital, is best known for its cultural heritable, being also a nightlife hotspot.

Both countries are served by large airports and there are numerous deals available into both countries. Finding a cheap flight to Lisbon is especially easy during fall, when the hype of summer is already behind us. The airport is located within the city which makes it easy (and cheap) to get to the hotel or hostel. Although the airport is large, you might find it cheaper to fly into a major European hub and take a connecting flight to Lisbon.

Flights to Madrid are easier to find since the city is one of the major gateways into the continent. The airport is a primary hub for Iberia , so there are quite a lot of possibilities to find good deals from the carrier.

However, you might be able to find great deals into either city. Regardless of your choice, there are numerous ways to get from Madrid to Lisbon (or the other way around) and you might find that a low-cost flight is cheaper than taking the bus.

>>Madrid to Lisbon, one way flight in October from €40 per person

Just like finding the best airfare option, it’s also important to find accommodation which suites your budget. Lisbon hotel rooms come in many sizes and prices but with some research you’ll be able to find good deals even at the hotels located in the city center. Remember that fall is shoulder season in Portugal so the prices are lower than during summer (although the crowds might still exist if the weather continues to be nice).

>>hotel room rates from €25 per night

On the other hand, hostels in Lisbon are affordable and they cater for all types of traveler. Since Lisbon is a party city, make sure to read the reviews before you decide which hostel to book. You really don’t want to stay in a party area if you plan to get your sleep at night.

Hostels in Madrid are somewhat similar to those in Lisbon. Madrid is also a very well known city for its night life and it also has the largest number of bars per capita on the entire continent. So if you plan to get your sleep during the night, you’d better search carefully and decided where to stay.

Both the hostels in Madrid and those in Lisbon offer dorms and private rooms, so they cater for every need. There are small hostels, tucked away from the hustle and bustle of the cities, which are perfect for couples and families. And there are also large hostels, ideal for those who like to be sociable and don’t exactly plan to get their sleep at night.