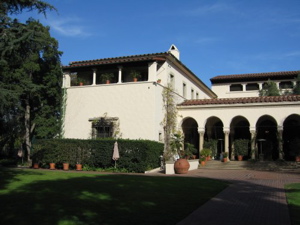 In Pasadena, two worlds that make up LA blend together. Pasadena doesn’t have the pomp of Bel Air or the prestige of Beverly Hills, but it does have a fair share of mansions and Mazerati dealerships and Bentleys in driveways. It’s also got a fair amount of poverty, but none of the widespread destitution that characterizes the poorest parts of Los Angeles.

Pasadena borders east LA and Glendale and extends south to South Pasadena, although
“South Pas” as it’s known, is its own city, separate from Pasadena in every way except geography and name.

Pasadena’s most famous event each year is the Rose Parade, which takes place January 1st and runs down Colorado Boulevard as part of the Tournament of Roses which includes the Rose Parade and the Rose Bowl. The Tournament of Roses takes over the city for the first week of the year and influences Pasadena all year round. Businesses are named “The Rose Bowl Hotel” or “Rose Bowl Flower Shop” and the city transforms its store windows and face to exude the spirit of the season.

Old-Town Pasadena is basically downtown Pasadena. This central shopping district is home to big retail chains and restaurants and finds itself packed with shoppers on weekends. Metered street parking is usually available on weekdays, on weekends or at night when the traffic picks up your best bet is to head to one of the city’s parking structures at Green St between Raymond and Fair Oaks, 45 S. Delacey Avenue between Colorado and Green St.

Old-Town embodies the mainstream commercial aspect of Pasadena and it is from this standard that the hipsters in surrounding areas of east Los Angeles rebel. Unlike Rodeo Drive or other expensive shopping areas, the feel of Old-Town is high class without being exclusive, accessible but not bohemian.

Pasadena is home to an increasing number of high tech businesses, none more so than the NASA’s Jet Propulsion Laboratory. The JPL develops rockets and satellites as well as staffing missions guiding the Mars Rover and sending probes into deep space. JPL craft have visited every planet in our solar system except Pluto.

Cal Tech also contributes to Pasadena’s image as a hotbed of technological innovation. One of the best engineering schools on the east coast, Cal Tech competes only with MIT in Boston for the country’s finest math minds. Albert Einstein used to lecture here and some of NASA’s top scientists are professors.