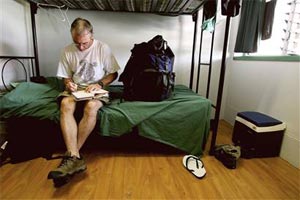 We recently wrote about the obvious fact that more hostels are adding private rooms to their offerings, and this phenomenon brings up another undeniable trend in hostelling, and one that is closely related as to that as well. Especially in the past 5 years or so, the number of older people using hostels as a way to save money and meet people seems like it’s gone up sharply.

As hostelling is about to celebrate its 100th birthday in 2009, we are reminded that the movement began in Germany as a method for young people to travel cheaply. And it feels like up until around 20 years ago, many of those same rules from the early days were still in place.

Daytime lockouts used to be the norm, both as a way of being able to clean the place properly, and to insure that guests actually saw the city instead of hanging around their room. And nighttime curfews were also the norm, partly for security purposes and so the hostel wouldn’t need an overnight auditor. Those rules are nearly extinct at every hostel around the world these days, although a few places still do have a curfew.

And we also can’t forget that these places used to be called “youth hostels” and most of them had an upper limit of around 25 for their potential guests. Here in 2008, you’d be hard pressed to find a hostel with an upper age limit, although a few we’ve heard of lately keep a limit of 35 to 40 or so. There are some places that have had a few complaints that older and younger travelers in the same dorm room don’t mix well, but we aren’t sure which group is more likely to complain about the other.

I really believe this trend of more older people staying in hostels is closely related to the boom in private rooms that we wrote about earlier, as well as the fact that many people have had great experiences earlier in their lives when staying at hostels. So especially with the relative ease of finding private rooms now, many of these travelers who are parents or even grandparents are booking at hostels with greater regularity.

For many people it takes a leap of faith and a positive experience in order to become part of the hostel cult. People who’ve dismissed hostels in the past as being nothing more than party rooms for college kids may not know that things have really changed in the past decade or so. But based on many of our own recent trips, we can see that older travelers are choosing hostels more and more often.

So don’t be surprised if the person checking in just before you is finding their Hostelling International Card right next to their AARP card. Don’t worry though, because they’ll probably be staying in a private room anyway, and probably will be out sightseeing before you even wake up for the first time.