Museum of Television and Radio 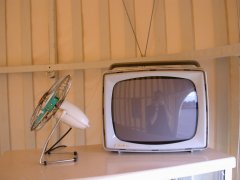 The Museum of Television and Radio is a befitting tribute for a city whose fortunes and future were constructed by mass media entertainment.

Now named the Paley Center, the location in Beverly Hills is part reference library, part movie theater and part celebration of Television culture. Visitors have the option of looking up old video clips and pulling them up on individual screens or watching them in a “family room” for four people. The Paley Center also screens films and shows daily in their movie theater sized screening room. Visitors might find shorts looking at the work of Jim Henson, Saturday Night Live over the years, or an exploration of another theme having to do with TV.

The Museum of Television and Radio is a tribute to the media’s past, but it also weighs in on contemporary shows and trends in the industry. Every so often the center offers a Media as Lens series, which assembles a room of people in the television industry and has them weigh in on current topics in the entertainment industry and world at large.

The Museum of Television and Radio is one of those free museums with a suggested donation of $10. Although you don’t have to pay it to enter, the museum is run off of donations in addition to the trust of William S. Paley, whom the museum is now named for.

Unlike typical museums, the Paley Center does not collect artifacts and mementos from Television shows. In fact, there is almost nothing tangible in the Paley Center. The museum exists as a way for future generations to see the shows that established television into the media giant that it is today. With over 140,000 shows selected by the museum staff for their influence, innovation, quality, or success, the museum supplies a way for scholars, historians, and the general public to look into what sort of shows were popular throughout the last century and what those shows looked like.

Unfortunately, the public cannot view the museum’s collection before arriving. Visitors can contact a curator with specific questions at 212.621.6600 from 4:00 p.m. to 5:45 p.m. EST.

The radio component of the Museum of Television and Radio operates much the same way that the television part does. Visitors can look through a catalogue of available shows and programs and choose one to listen to. Unfortunately, copies of programs or even clips of shows are not available for the public as part of the donation agreement with the museum.