Merida, Spain : An Excellent Side Trip from Lisbon 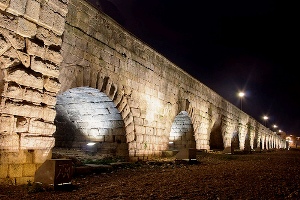 Now that winter is behind us, planning to visit some the Roman ruins not in Rome is a great idea for a spring vacation. You can find them in many European cities, as well as in places close to Europe.

Merida, Spain is the former capital of the Roman province of Lusitania. There are several interesting places to visit here, including: the Puente Romano – spanning over Guadiana River, still used by pedestrians, and is the longest of all existing Roman bridges -, the remains of the Forum, the Amphitheatre and the remains of the Circus Maximus.

You can start your vacation in Libson, of course. Cheap flights to Lisbon are not hard to find, regardless of what European city you fly from. There are many low-cost carriers serving the Portuguese capital and often you’ll be able to find various deals. For example, a one-way flight from London into Lisbon starts at €68.52 per person (in mid-April, on EasyJet).

Do plan to spend several days in Lisbon, as there are quite a lot of things to do and see here. Hotels in Lisbon range from cheap to very expensive but you can easily find something to suit your budget. Typically, in large capitals, the prices don’t vary much from season to season, but many hotels have special offers for the low periods (spring and fall). If you plan stay for 3 nights in Lisbon, you can pay as little as €75 for the entire stay in a 2-star hotel located at the top of Bairro Alto with panoramic views of Lisbon.

Now that you’ve explored Lisbon, it’s time to head to Merida. You can travel directly to the city or you can stop in Madrid and spend several days there as well. Then, either take the train or bus to Merida.

The train from Madrid to Merida takes about 5 hours and costs around €30. It departs from the Atocha train station.

The bus from Madrid to Merida also takes 4 to 5 hours and costs around €20-30. There are several connections per day. Tickets and schedules can be found on this site (the main Spanish bus network site).