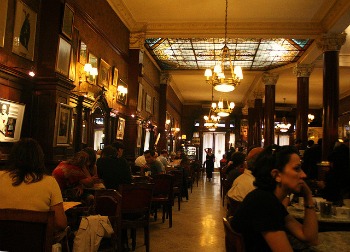 Though the rock-bottom prices of the early 2000’s have gone up considerably Argentina still regularly tops the lists of best cheap countries to visit, thanks to a very favorable dollar to peso exchange rate.  One US dollar will get your nearly four pesos, making the average price for a decent bottle of wine around $4 US and a heaping platter of tender, juicy beef will run you between ten and fifteen bucks.

It’s easy to be put off by the initial cost of traveling to Argentina. Flights to Buenos Aires are not cheap; expect to pay anywhere from $700-$1500 per person, depending on where in the US you’re coming from. But, the extra cost of flights is easily made up once you are on the group. Living large in Argentina on a small budget it quite easy. Cheap Buenos Aires hotels will only cost $25-30 per night for a double room, while slightly more upscale accommodations can be had for under $100. If you’re fine with a dorm bed in a hostel, you can even get by on under $15 per night.

Of course, Buenos Aires is one of the most expensive places in Argentina, seeing as it’s the largest and most cosmopolitan city in the country. In other areas, you can spend even less, though you’ll sacrifice some of the European flavor, low-cost luxury shopping and decadent nightlife present in the capital. For those who want to indulge in fine food, fantastic wine and luxurious accommodations and shopping, Buenos Aires is an ideal destination that allows you to indulge without the high price tag.