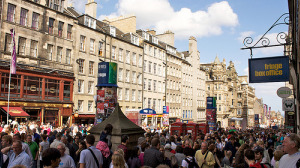 The cleaners may still be sweeping up what remains of this year’s Fringe Festival in Edinburgh, which wrapped up yet another year of crazy fun on August 31, but with the ever-increasing popularity of this festival that can mean only one thing: it’s time to start planning for next year.

The 2010 Edinburgh Festival Fringe (as it’s properly known) is set to run from August 6-30, and as anyone who’s been to the festival before will tell you, it’s a whopping good time – and it crowds the city like just about nothing else. That’s great if you like big, outdoor parties, but not so great if you’re a last minute travel planner (and yes, I acknowledge the words “last minute” and “planner” don’t really belong in the same sentence) who just shows up in Edinburgh expecting to find an available bed at an affordable price.

Does this mean that if you don’t book your accommodation right this very second, nearly a year before the 2010 festival starts, that you’ll be sleeping on the streets of Edinburgh or forced to skip the festivities altogether? Of course not. In a popular tourist city like Edinburgh, there are almost always (note the qualifier) going to be places you can stay, even in the busiest times. But for most travelers, this isn’t something to take comfort in, because the rooms that will still be available at the last minute are either going to be extraordinarily expensive, too far from the action, or just plain gross. There is, after all, a reason they’re empty during the most important festival of the year.

So how can you prevent the catastrophe of showing up to the Edinburgh Fringe with no bed to sleep in? Fly-by-the-seat-of-your-pants travelers, listen up – this one may be tough to stomach. You’re going to need to book in advance. I know, I know – but it’s really for the best. And “in advance” doesn’t mean 11 months in advance, either. It just means you’ll need to do a little planning before you show up.

If you’re one of those travelers who loves the trip planning process and you know without a doubt you’re going to next year’s Fringe Festival, then by all means scope out which hostel you want to stay in ASAP and book yourself a bed without delay. The sooner you do this, the better off you’ll be in terms of the choices you’ll have – and this includes budget choices, meaning you’re more likely to get a better deal on a room if you’re booking in advance.

But if you can’t handle the idea of booking a hostel bed for something that’s happening a year from now, then here’s what I recommend you do. It still involves some travel research, and it’ll involve some time and organization on your part, but this method will let you maintain some flexibility in your travel plans.

1. Research the hostels in Edinburgh.
This is the part that’s going to feel most like “work” if you hate trip planning, but you only have to do it once. There are quite a few hostels in Edinburgh. This means if you’re visiting at any other time of year, you’ll be spoiled for choice and likely have no issues just arriving in town and finding a decent bed at a decent price. But you’re not visiting at “any other time,” are you? Of course not.

Do some reading about which are the best hostels in Edinburgh. Find out where they’re located, what amenities they offer, what they charge for their beds (and make sure you check their “festival prices,” as those will be higher than their regular season prices). Make a note of the ones that appeal most to you, based on their proximity to Fringe events, their freebies, their prices – whatever is most important to you.

2. Email your chosen hostels regularly.
I’ll let you define what “regularly” is, but it’s probably a good idea to try not to be a pest. The idea here is to get an idea of how full the hostel is during the upcoming Fringe Festival, and how full it’s getting over time. So to start with, if the hostels you’re checking in with say they’ve got no bookings (or only a few), you can probably just check in again a month later. Sending a quick email once a month to the hostels you’re watching will let you see when they start filling up and allow you to grab a bed just before they sell out.

Of course, if “just before they sell out” is still four months before the festival and you’re not 100% certain you’ll be going – or you just don’t want to commit to anything that far out on the calendar – then your emails should include an addendum.

In addition to checking in regularly (which has the added benefit of allowing you to become a known quantity to the hostel staff, so that once you choose a hostel you’ve got friends there already when you show up – provided, of course, that you took the advice at the start of this section to heart and avoided becoming a pest), you’ll want to let them know why you’re doing this. Then, if they respond eventually with, “Oh, we’ve only got three beds left,” you can say, “Well, I’m still not ready to book… Do you have any suggestions for another place to try if you guys are full when I check back?” There are some hostel families in Edinburgh, so it’s likely they’ll have a hostel or two they can refer you to. These may have already been on your list, but if they weren’t then that’s one more hostel to add to your watch list.

3. Thank the people you’re emailing.
So, you’ve come to the end of Project Edinburgh Hostel Watch, and you’ve booked a room. The staff at the hostel you chose are overjoyed because you’re not going to be emailing them anymore (I kid, I hope), and may give you a friendly poke in the ribs over it when you finally show up for your stay. You’ve thanked them, I’m sure, but spending money at their establishment is a good thanks as well.

But what about the hostels you didn’t choose? Did you thank them? Or did you just stop emailing them?

If you’ve just exchanged quick emails with no one in particular at the other hostels and never established any kind of rapport with them, then you don’t have to worry about sending a little “thank you” email to let them know you’ve booked a bed elsewhere. But if you’ve been emailing the same person on the staff over and over again, then it’s probably not a bad idea to send off a little note explaining why they won’t be hearing from you anymore.

I have a tendency to guilt trip myself into feeling badly about things I shouldn’t, but in this case I think it can’t hurt to tell them you’ll pass their hostel’s name onto other travelers headed to Edinburgh, or leave them a nice review on a hostel booking site, or some such thing. They’ve taken the time to answer your emails nicely, so it’s just good karma to offer something nice back to them. And a little good karma never hurt, right?

Some Edinburgh Hostels to Consider

>> For more information about the Edinburgh Festival Fringe, be sure to bookmark the festival’s official website to keep updated on all the latest – including the program schedule and even how you can be a performer (if that’s your thing).