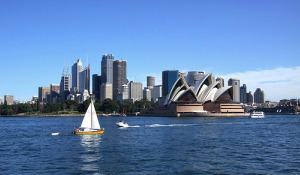 You don’t have to spend time in Australia to know that Australians like to party. All you need to do is stay in hostels just about anywhere in the world – if there’s a group of lively, loud, and happy people staying in the hostel with you, chances are good they’re from Australia. So it shouldn’t be surprising that so many of the hostels in Sydney are party hotspots.

But what if you’re interested in a budget bed in Sydney without the party? What if you like a social atmosphere but you actually want to get some sleep at night? Then you’ll be pleased to know that not all of Sydney’s hostels are all about the party. There are quite a few hostels – or backpackers as they’re more typically called in Australia – where you’ll have a great time with all your new friends and still get a decent night’s sleep.

Where’s the party in Sydney?

Here’s the thing – just because you might choose a quieter hostel to sleep in doesn’t mean you’re some kind of hermit who doesn’t want to go out and have a good time. In Sydney you can have the best of both worlds, because there are plenty of places where you can party in the city and then head back to your hostel for a peaceful night.

One of the areas most famous for its nightlife is the Kings Cross neighborhood, and there are many hostels located in and around this area as a result. If the hostel you’re choosing is in or near Kings Cross and you’re looking for a quiet night’s rest, be sure there isn’t an on-site bar at the hostel or you might find the party follows you home. Otherwise, staying around Kings Cross is a great way to be a short walk from great clubs and bars but still end up in a quieter hostel.

Neighborhoods around Kings Cross which are also known for their nightlife are Darlinghurst and Woolloomooloo, and the suburb of Newtown is something of a bohemian area with funky shops and cafes as well as a famous theatre that hosts world class musicians. Although many of the main tourist attractions in Sydney are in the city center, that’s also the main area for Sydney’s business and government buildings – so it’s not necessarily the best place to look for good nightlife.

Assuming you’ve partied yourself out elsewhere and you want a quiet place to sleep (so you can recharge your batteries for yet another fun-filled day in Sydney tomorrow), here are a few Sydney hostels that – while sociable – aren’t known as party central.