Hostels, Hostals, B&Bs, & Guesthouses in Europe: What’s in a Name? 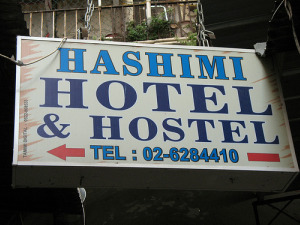 Back in my youth, before I was thinking and writing about travel all the time, I’d heard of hotels (who hasn’t?) and I knew of something called a “youth hostel.” It wasn’t until much more recently, when I really started paying attention, that I learned most of the hostels had dropped the word “youth” from their name and were welcoming all ages, many offered private rooms akin to hotels (some even with private bathrooms), and that hostels weren’t the only kind of budget accommodation out there.

Depending on where you go in the world, it’s not just the word “hostel” that you need to be on the lookout for when you’re trying to save money on accommodation. In Australia, for instance, they’ll often call their hostels “backpackers” – just like the people who typically stay in them. But just because they’re called “backpackers” doesn’t mean they’re any more restricted than the hostels that continue to call themselves “youth hostels,” even while they’ve done away with their age requirements.

In Europe, the variety of names for budget accommodation is even bigger, but all the options sound less specific to one type of traveler or another. Each type of budget accommodation is going to be a little different and could offer different pros and cons, so it’s worth learning about the variations before you start researching your trip. Below, you’ll find a list of the main kinds of budget-friendly accommodation, and what you can generally expect from each.

Most budget hotels won’t actively use the words “budget hotel” in their names, probably because the word “budget” could scare away people who might not be interested in staying in a hostel but still want a cheap room. Instead, you’re more likely to find budget hotels (especially those in the 1- or 2-star range, depending on the city/country) listing themselves among hostels and calling themselves hostels instead.

This means that you can’t take for granted that every place listed on a hostel booking service is, in fact, a hostel. Many of them may very well be hotels – all private rooms with en-suite bathrooms. It’s usually easy to tell by reading the descriptions, and if the price is right you may not care one way or the other. But if you’re looking for a social place to hang out with other travelers, these budget hotels aren’t usually the best bet. They don’t tend to have common rooms or encourage socializing among guests.

On the plus side, in budget hotels you’re more likely to get a room to yourself, and some even offer perks like free breakfast or free internet access.

This is the most commonly-accepted term for a cheap place to stay throughout Europe, but not all hostels are alike. Because the word “hostel” is instantly recognizable and serves as a magnet for budget travelers, many accommodation alternatives market themselves as hostels even if they’re technically not. As I mentioned above, if the price is right then you may not care what category the place falls in. But if you do, here’s what I’d consider a traditional hostel.

Traditional hostels in Europe offer dorm-style rooms, usually with bunk beds (but not exclusively). They’ve got common rooms for hanging out and relaxing with fellow travelers, and many have things like kitchens for guest use, computer stations, and on-site bars or cafes. More hostels these days have some private rooms in addition to the dorms, but a place with all private rooms isn’t a hostel in my book.

Hostels are great for travelers who are going solo and want to make friends, or those who are traveling in a group but are still hoping to meet up with other folks. At their best, they’re social places with communal services to cut costs. Some still have age limits, but that’s largely a thing of the past.

When I first saw the word “hostal” I honestly thought it was a typo. And then I saw it repeatedly. So I did some digging. Turns out that “hostals” are, in fact, not hostels. Imagine that.

Hostals can be an excellent choice for budget travelers who want to pay hostel-like prices but aren’t necessarily interested in a big dorm-style room full of bunk beds or, for that matter, in partying it up at the on-site bar. I think it’s fairly accurate to describe hostals as “guest houses” or “B&B” (see below), in that they’re usually quite small and often in converted apartments or houses which the owners may or may not live in. The bathrooms may very well be shared, and there may be a kitchen for guest use, so they can be more social than a hotel – but they still usually offer more privacy than a hostel would.

Don’t get too excited about staying in hostals everywhere you go in Europe, however, as they’re much more location-specific than the other entries on this list. The “hostal” is a Spanish phenomenon, but you’ll find them all over Spain. Outside Spain, you’ll be out of luck.

Outside Spain, if the idea of a hostal sounds like it’s right up your alley, then the word you’ll want to be on the lookout for is “guesthouse.” Or, sometimes, two words – “guest house.”

A guesthouse is, like a hostal, not a hostel or a B&B (see below) but somewhere in between. They tend to be on the smaller side, having often been a private home or apartment in a former life, and have a mix of common areas which all guests use and private rooms. A guest house could be a private home where the owner is renting out a few bedrooms and they still live there, too – or it could be a place where you’ll check in with the owner and then never see them again.

There might be a common area like a TV lounge, there might be a guest kitchen, and there might be a computer you can use. The bathrooms are more likely to be shared than private. You may or may not get breakfast (and if you do, it might be that the fixings for a continental breakfast are just made available in the guest kitchen for you to help yourself). Staying in a guest house is akin to feeling like you’re renting an apartment instead of just a room – only you’re renting it collectively with a few strangers.

The idea of the bed & breakfast, or B&B, is as old as the hills. I also give the term points for truth in advertising – because most of the time you get exactly what’s in the name. Book a room at a B&B and you should rightly expect a bed (and the room that it goes in, of course) and a decent-sized breakfast in the morning.

What you actually get when check into a B&B can vary a little bit according to the country, and some places do it better than others. I still think England, Scotland, Ireland, and Wales are hard to beat when it comes to what I want from a B&B, but other places are catching up bit by bit.

It’s worth noting that not all B&Bs are budget-friendly – and in some cases, they’re quite a splurge. But some B&Bs are only slightly more than a private room in a hostel might be and offer more personalized service (and a bigger breakfast). In some places, the “breakfast” part of the equation might be minimal, but B&Bs tend to promise more privacy as well as a cozy and romantic atmosphere, still at a decent price.