Hop Over to Ireland to Celebrate St. Patrick’s Day Right 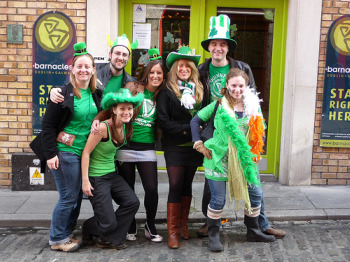 To some people it seems like the month of February is a cruel joke – it’s often the dreariest month, with nothing but gray skies and rain for days on end, and from here it feels like the next long vacation is months away. But you don’t have to be Irish to put a certain date in mid-March on your calendar that represents a great party to look forward to.

While St. Patrick’s Day isn’t as huge a holiday in Scotland overall, it’s still an excuse to wear green and drink more than you might otherwise. And in Edinburgh there are likely to be bigger St. Paddy’s Day parties than in some other cities. But if you really want to party properly, your best bet is to head to Ireland – which, luckily, is easy to do from Scotland.

There are lots of holidays that people travel for when airfare increases just before and just after the big day, and there’s a little bit of that associated with St. Patrick’s Day – but it’s still much easier to find St. Patrick’s Day travel deals than it is to find deals for bigger holidays throughout the year. If you’re already in Scotland, you should be able to find cheap flights to Dublin or even cheap flights to Cork (if you want to skip the crazier Dublin celebration altogether) on one of the many discount airlines serving the Emerald Isle. In particular, you should definitely look for Ryanair flight deals, since they’re actually an Irish airline. Just remember that their super-low fares usually also come with super-low standards for service.

Once you figure out how to get over to Ireland for the St. Patrick’s Day holiday, you’ll want to sort out your accommodation next. More intrepid travelers may be used to arriving in a new place and then finding a place to stay – but when you’re talking about visiting (say) Dublin over such a major holiday, you may end up with no place to lay your head or leave your bags because everything’s booked. So the sooner you can reserve a room, the better off you’ll be.

Also remember that Dublin is a notoriously expensive city to visit, so you might want to look into the many hostels in addition to searching for cheap hotels in Dublin. And if you’re all about the party, the closer you stay to the Temple Bar area means you’ll have less distance to stumble home after a long night of drinking.