Hiking and Dining in Appenzell

Switzerland’s Appenzell, a half-canton of only 66 square miles, is packed with more charm and cultural richness than found in many countries. Cradled and protected by the surrounding Alpstein massif (mountains), the region’s rugged terrain would normally be inaccessible if it weren’t for an intricate trail network linking dozens of welcoming guesthouses and mountain hotels that just happen to serve delectable cuisine. 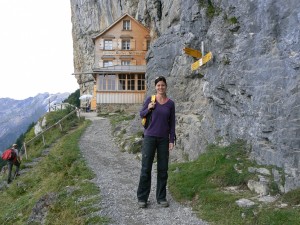 You don’t merely do lunch high above the lush green meadows. Food is interwoven into the fabric of Swiss culture like hiking, yodeling, skiing. Notice how these active pursuits pair nicely with the more than 400 indigenous cheeses, microbrews like Vollmond (full moon), and a wide variety of cured meats like Mostbrockli (dried beef). Each bite of these morsels is a direct act of savoring the essence of mountain living. Hiking is a great place to start. Terrain widely varies from narrow tractor roads passing through vast emerald meadows to well marked mountain trails steeply switch backing along rocky cliff sides to lofty summits. Each turn upward on narrow gravel paths not only offers “wow-inducing” vistas but also time to mingle with Swiss hikers of all ages.

It’s clear that folks here take their pastime seriously including satiating their appetites after this prolonged physical exertion. 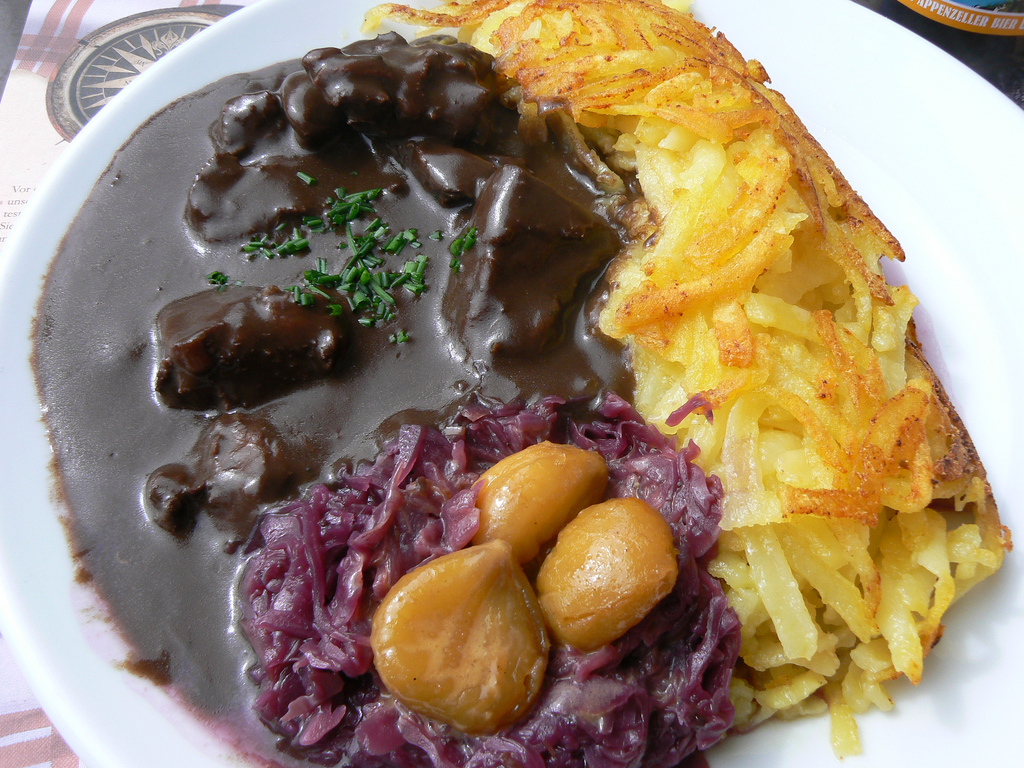 One stop I had the opportunity to experience was situated along a panoramic ridge trail leading to Ebenalp and the limestone caves of Wildkirchli which contain evidence of habitation dating to the Paleolithic era. You’ll know the summit is near when as you continue your steady climb tight along a rock ridge, a striking gabled wooden building tucked underneath a rock outcropping comes into view. 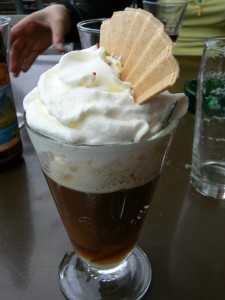 Upon reaching the grand terrace of Gasthaus Aescher Wildkirchli, a restaurant with hostel-type guestrooms on the second floor, you get the definitive sense that it’s time to take a break. The hearty food served here is made on site with fresh local ingredients. During hunting season, same-day caught venison, elk, and mountain goat are served in a stew called Hirsh Peffer. Similar to Stroganoff but more flavorful, the perfect side dish to accompany it is Rösti, a type of hash brown rich in butter, crispy on the outside, and soft on the inside.

Don’t even think of asking for a mere glass of water or soda here! Spectacular mountain views in every direction serve as a reminder of just how far you’ve climbed and how much more there is to explore after lunch. Since calorie counting is now a laughable notion, go for the complete experience and order up a Cave Coffee named after nearby Wildkirchli Caves where prehistoric bear skeletons were located over 100 years ago and an underground chapel resides. The Cave Coffee’s main ingredient is Alpenbitter, a schnapps made from over 40 herbs, spices, local roasted coffee, and generous clouds of real whipped cream on the top. Or perhaps wine is more your style. Go with Sauser, a locally made unfermented grape juice. And for a dessert that will even wow the die hard Swiss hikers filling the tables around you, their signature sundae features a few scoops of coffee and vanilla ice cream buried under a towering mountain of house made whipped cream.

This was a guest post by Steve Mirsky. All photos are by the author and may not be used without permission.