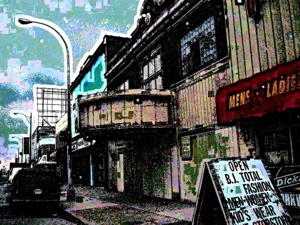 Highland Park and Eagle Rock make up the area between Glendale and Pasadena in East Los Angeles. Although they are incorporated within the city of Los Angeles, the two neighborhoods have distinct boundaries and neighborhood identities.

Highland Park is a neighborhood north east of Los Angeles bordered by the 110 freeway, South Pasadena, and Eagle Rock. The neighborhood is relatively small, but within its borders there is a progression from a depressed neighborhood full of people just trying to get by, to an area of interesting architecture, beautiful houses and relative wealth.

Highland Park is one of the oldest settled suburbs of Los Angeles. During the 1960’s the area became predominantly Latino and in the last few decades a significant black and Asian population has moved in to the neighborhood.

Attractions in Highland Park include the Southwest Museum, which has a vast collection of Native American artifacts from surrounding tribes, and various local restaurants and bars.

A formerly somewhat depressed area similar to Highland Park, in the last few years Eagle Rock has been revitalized and rebounded from a few decades of decline. Termed “the new Silver Lake” when local residents realized that housing prices were somewhat less in Eagle Rock than surrounding areas, Eagle Rock has seen an influx of urban hipsters and residents with disposable income that has tipped the neighborhood on its head.

Eagle Rock’s small area has the self-contained feel of a college town. The neighborhood is home to Occidental College, a small liberal arts university with 2,000 students and a significant number of those students stay in Eagle Rock after graduation. The local student watering hole “The Chalet” is frequently ranked in the top ten bars in Los Angeles and local restaurants like Casa Bianca and The Bucket draw accolades from food critics across the city.

Casa Bianca and The Bucket are both neighborhood mainstays in Eagle Rock. They are landmarks that have been around forever. Two new restaurants have opened across the street from each other on Colorado Boulevard at the heart of Eagle Rock, Dave’s Chillin’ and Grillin’ and The Oinkster. “Dave’s” is a sandwich shop run by Massachusetts transplant Dave Evans which focuses on the quality of ingredients for the best sandwiches in the city, The Oinkster bills itself as “slow fast food” and has the name of fine dining chef Andre Guerrero to back it. While the Oinkster participates in such foolery as making their own ketchup every day from scratch, the dining experience at Dave’s makes you feel like you’re getting a custom sandwich. Just ask Dave about his ingredients and watch him go.