Have Yourself a Merry Little Christmas … in Lisbon 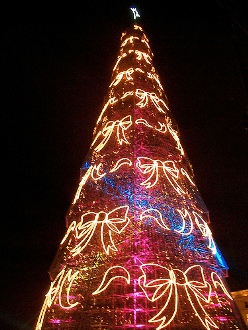 Forget about the busy New York and the traditional Rockefeller Center Christmas tree and ice rink. Skip the Christmas Markets in Vienna as well this year. Instead, head to Portugal for a traditional Christmas.

Why you might ask? After all, Lisbon doesn’t see snow and there aren’t even Christmas markets open at this time of the year. Instead, Lisbon can offer a different way to spend the holidays, especially if you plan to focus on the religious side of the holiday.

So, what are you waiting for? Look for international airfare into Europe. This time of the year is considered high season so expect the flights to be crowded and the prices quite high. However, the traditional Christmas destinations don’t include Portugal so you will be able to find affordable flights.

It’s a good idea to fly into a major hub, such as London, Paris or Amsterdam. Once on European soil, look for low-cost flights to Lisbon or even plan to get there by other means of transport. The rail network is well developed in Europe and you can get to every corner of the continent quite fast and cheap. Buses, while dreaded by Americans, are preferred by Europeans, especially if time is no concern for them and the budget is on the low side.

Where to stay in Lisbon

Once you have arrived safely in Portugal’s capital, you need a place to stay. Of course, ideally, you should have booked the hotel room before you left home but fear not, you can find places once you arrive in the city.

Cheap Lisbon hotels can be found all over the town, but there are certain neighborhoods that are of particular interest for the tourists. Bairro Alto or the “high town” is where the nightlife can be found while Chiado is the shopping district.

Other choices of accommodation include the Lisbon hostels. The rooms are cheaper than in hotels and the facilities resemble those of cozy small hotels. Of course, make sure to read the reviews carefully since you don’t want to end up in a party hostel if you plan to sleep during the night.

The Nativity scene is the main focus of the celebrations. Although Christmas trees are common in Portugal as well, the families gather around the Nativity scene. Now, light a yule log in the fireplace.

On Christmas it’s traditional to welcome the souls of the people who have died. Sprinkle bread crumbs and seeds in front of the fireplace as it is believed to bring fruits and grains during the harvest season.

Children should set their shoes to receive the gifts from infant Jesus in them. It’s an old tradition, still alive in Portugal. In some other European countries, children set their shoes on the night of St. Nicholas as he is believed to put the presents in the shoes but only for those children who have been good during the year.

Prepare the Christmas feast, consisting of dried codfish served with boiled potatoes. The meal is eaten right after the Christmas Eve Mass which takes place at midnight. And don’t forget to make “rabanadas” as well. It is white bread, soaked in eggs and wine. Then it’s dipped in sugar and fried until it takes a candy-like crust.