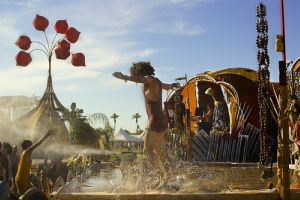 Whether or not you love everything about L.A. and southern California, you probably love the weather during most of the year. There aren’t many places in the United States where you can plan an outdoor music festival during mid-April and count on nice weather. With the case of the Coachella music festival, however, you get not just lovely weather but the pretty surroundings outside Palm Springs.

If you’re planning to go to Coachella this year and you don’t already live in the Los Angeles area, your first order of business is to find a flight. Time is running out, but you still should be able to find a cheap plane ticket to one of the area airports that will get you close enough to the festival.

The closest airport, of course, is Palm Springs International (PSP) – but it’s a smaller airport and may not have the best deals on tickets. Next in line is the LA-Ontario Airport (ONT), and after that is the monster of LAX. In every case you’ll still need to rent a car or find ground transportation to the festival site, since even the Palm Springs airport is 20 miles from Coachella, but you’re more likely to find more cheap flights to Los Angeles if you’re looking at LA-Ontario or LAX simply because of their size and/or proximity to L.A.

Of course, if you already live in L.A. and you don’t want to drive all the way to Indio for Coachella, you can absolutely make use of airport parking at LAX, hop on a short flight to Palm Springs airport, and then rent a car or hitch a ride with another festival attendee for the rest of the way. But that seems a bit like overkill, unless you’re actually playing in the festival, in which case you probably shouldn’t need to drive yourself anywhere in the first place.