Getting to the Fringe Festival on a Budget 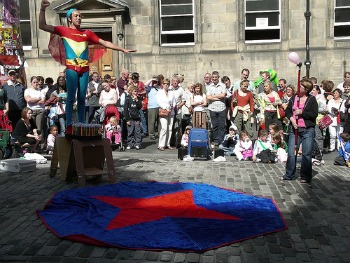 Visiting a city when it’s in the midst of a celebration always makes a trip more interesting – and when the celebration is a world-famous month-long festival of arts, that’s even better. In other words, a visit to Edinburgh during the Fringe Festival is a trip you won’t soon forget.

As the name suggests, the Fringe Festival isn’t about the arts in the usual sense. Yes, there are theatre, music, and dance performances scheduled at venues throughout the city during the month of August, for which you can buy tickets and sit in the audience like you would in any similar venue around the world. In addition to that, however, there are street performances everywhere you look – and it’s this kind of artistic expression that the festival is perhaps best known for. Buskers are on every street corner, performance artists attract crowds on every pedestrian street, and the crowds that fill the city are never without entertainment.

Unfortunately, the month when all of this is going on is also one of the most expensive times to visit Europe in general. It’s more challenging to find good deals on airfare to Edinburgh or cheap hotels in Edinburgh during the summer when the city’s weather is most conducive to visiting. This is compounded by the popularity of the Fringe Festival, since people often book up the best budget accommodation months in advance. There are Edinburgh Festival Fringe travel deals to be had, though, if you’re willing to do your research.

It’s advisable to begin your search for accommodation at least six months before your trip (more if you’re on a tighter budget), and for a good deal on a flight you’d be smart to start looking at airfare even more than six months beforehand. Just by keeping an eye on what airfare costs you’ll know when the prices are going up or down, and you’ll know whether a so-called “deal” is all it claims to be.

As for tickets to the events themselves, if you’re intent on seeing specific performances then be sure to sign up on the official site so you know when tickets go on sale. Otherwise, you’ll never lack for entertainment even if you never buy a ticket to a show just by walking through the city and stopping to watch any street performers that catch your eye. Just remember to bring small change for tips.