Getting from London to York 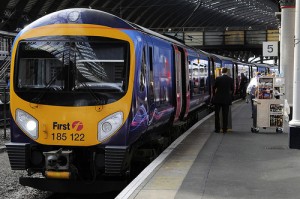 Located in Yorkshire, York is an ancient cathedral city. Its history dates back to pre-Roman times and the city is filled with excellent preserved historical buildings. In Roman times , York was one of the most important cities in Britain and is directly linked to Constantine the Great, who was proclaimed emperor here. Later it was a major Viking settlement.

The closest airport to York is Leeds-Bradford International Airport (LBA) but it’s the least convenient and most expensive in the area. Further away is Manchester Airport (MAN) which has quite good connections to the rest of Britain and Europe. But the majority of visitors arrive through one of London’s airports.

>>read more about Getting from London to Manchester

The fastest and easiest way to get from London to York is by train. But there are also buses if you want to save money and don’t mind 5 hours of traveling.

Trains from London to York

Nation Rail operates trains between London’s Kings Cross and York. The travel time is about 2 h and the single fare starts at £47.00, but depends on the time of departure. There are departures about every 30 min to 1 hour.

Grand Central Rail also operates trains between London Kings Cross and York. There are departures about every 30 min to 1 hour, every day. The travel time is also about 2h and the off peak single fare is £93.10.

Buses from London to York

National Express operates direct buses between London and York. Connection buses are also available and there are departures about every 30 min to 1 h , daily. The fastest travel time is 4h 50 min and the single fare starts at £16.50 but depends on the time of departure.

Driving from London to York

You can rent a car and drive the 200 miles between London and York. The travel time is about 4 h, but it does depend on the traffic.