Getting from Berlin to Warsaw 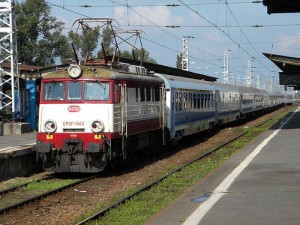 Berlin is best known for its history and nightlife. Tourists come here to see what’s left of Berlin Wall and explore the museums and other sites.

Warsaw is the capital of Poland and is located on the Vistula River. It is an excellent start point for planning to visit both the Baltic Sea coast and the Carpathian Mountains. Most of the major sites area located in the city center and include the Royal Castle, the Royal Palace and the Poster Museum.

The cheapest and easiest way to travel between Berlin and Warsaw is by train. Buses are not much more expensive but take 9 hours and run only 3 times a week.

Flights from Berlin to Warsaw

Berlin is served by two airports, but right now only Tegel International Airport (TXL) handles the international flights to/from Warsaw. It is the main international airport serving Berlin and is hub for Air Berlin and Germania. It is also focus city for Lufthansa.

Starting with June 2012, Berlin Brandenburg Airport (BER) is scheduled to open and it will handle flights to/from Warsaw. However, the opening has been postponed indefinitely. When eventually opened it would be hub for Air Berlin, EasyJet, Germania, Germanwings and Lufthansa.

Warsaw is also served by two airports, but the one operating flights to/from Berlin is Warsaw Frederic Chopin Airport (WAW). It is located about 10 km from the city center. It is hub for LOT Polish Airlines, OLT Express, EuroLOT, Enter Air and Wizz Air (until Jul 17).

The only company operating flights between Berlin and Warsaw is LOT Polish Airlines. The flight time is 1h 15 min. In mid-June 2012, the single fare is €177 but you can choose an indirect flight (via Riga) and pay €164 on Air Baltic. Return flights during the same period start at €101. By mid-October 2012, the single fare is €75 (indirect) on Air Baltic.

Trains from Berlin to Warsaw

Buses from Berlin to Warsaw

Berlin Linen Bus operates direct buses between Berlin and Warsaw (Warszawa) three times a week (Sat, Mon, Thu). Buses depart Berlin at 6:55 a.m. and take 9 hours to get to the destination. The single fare is €43.

Driving from Berlin to Warsaw

It is possible to rent a car in Berlin and drive the 590 km to Warsaw. Both Germany and Poland are part of the Schengen area, so you won’t be paying any surcharges. The travel time is about 7 h 10 min on E20 and Route 2. Please note that this rout has tolls.