Getting from Munich to Vienna 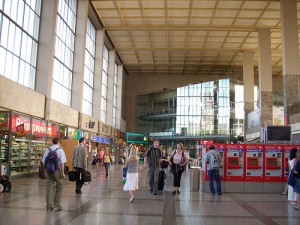 Munich is the capital of Bavaria, well known for Oktoberfest. But the German city also offers palaces, churches, relaxing gardens and interesting squares to spend your time. Don’t miss visiting some of the museums either.

>>read more about the Things to do in Munich

Vienna is the capital of Austria, a lovely city well known for its architecture, museums and opera. Walk on the Ring Street to see the most important sights in the country, visit Schonbrunn Palace with its gardens and zoo. And don’t miss Stephansdom, an impressive Catholic cathedral right in the center of the city. For lovely views of the city, talk the elevator to the observation deck on Danube Tower or ride the Giant Ferries Wheel in Prater.

If you purchase the train ticket in advance , it’s almost as cheap as the bus ticket (€39 train, €34 bus) but you’ll be saving two hours of traveling. Either way , you won’t need to deal with getting to/from the airport.

Flights from Munich to Vienna

Munich International Airport (MUC) is the second busiest airport in Germany and is a major hub for Lufthansa. It is also hub for: Air Berlin, Augsburg Airways and Air Dolomiti.

Vienna International Airport (VIE) is located just outside the city limits and is home base for Austrian Airlines and Niki. It is the busiest airport in Austria. S-Bahn (commuter rail) is the cheapest and easiest way to get from the airport to the city center but there are also buses which go to important squares.

>>book a cheap flight to Munich

Trains from Munich to Vienna

Bahn.de operates trains between Munich and Vienna (Wien) Westbahnhof . If you purchase in advance, the single savings fare is €39 on the direct train (RJ) and €59 with a connection in Plattling. The standard fare ranges from €79.40 to €89.20 one way. The travel time is between 4 h 20 min and 5h.

Buses from Munich to Vienna

Eurolines operates a bus line between Munich and Vienna. It departs Munich at 7 a.m. daily and the travel time is 6 h 30 min. On the way back, the bus departs Vienna daily at 4:45 p.m. The promotional single fare starts at €34 , but depends on how far in advance you purchase the ticket. The standard single fare is €47.

Driving from Munich to Vienna

You can certainly rent a car in Munich and drive to Vienna. Both Germany and Austria are part of the Schengen area so you won’t be paying any surcharges, either. On A1, the distance is 406 km and you should be able to cover it in about 5 hours (depends on the traffic, of course).