Getting from Buenos Aires to Uruguay 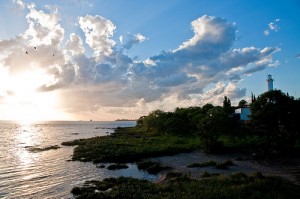 Uruguay is the second smallest country in South America. It is bordered by Argentina to the west and Brazil to the west. It has an Atlantic Ocean coastline and has a subtropical climate.

Montevideo is the capital of the country and home to the largest airport in Uruguay, while Punta del Este is a very popular beach destination in the country.

Buses and ferries are the cheapest options to get between Buenos Aires and Uruguay. If you want to travel to other cities than the capital of Montevideo, you’ll need to connect through the capital anyway (to catch a bus).

Flights from Buenos Aires to Uruguay

In mid-May 2012 expect to pay from US$82 one way on PLUNA (from EZE) , while a return flight starts at US$134. The flight time is 1 h (one way). It’s actually cheaper to fly from EZE and back into AEP (on PLUNA and Aerolineas Argentinas).

Ferries from Buenos Aires to Uruguay

Buquebus operates a high-speed ferry between the two capitals and the single fare starts at $178.42 UYU / US$41 (promo web). The travel time is about 3 h 15 min and there are several departures per day.

Buses from Buenos Aires to Uruguay

There are three bus companies operating between the two cities. The single fare starts at AR$ 160 / US$38 and the travel time is 8 h.

To get to other cities in Uruguay, you need to connect via the capital of Montevideo. Once you get there, just ask for a ticket at the bus terminal (unless you travel during the weekends or holidays, it’s hardly likely to worry about not finding a seat).