Getting from Berlin to Prague

Berlin is the capital of Germany and also its biggest city. It is also an excellent travel hub, offering connections to the rest of the country and the rest of Europe. Many travelers choose to head to Central Europe as well and one of the most beautiful cities to visit there is Prague, the capital of Czech Republic.

Prague might have lost its “hidden gem” status but that doesn’t mean you won’t be able to enjoy the city without falling for the touristy things. One thing to consider is showing up in Prague in spring or fall, when the tourists are generally avoiding traveling. Pack warmer clothes and something to fight the rain, though.

The short distance – 356 km – between Berlin and Prague doesn’t require a flight but there are low cost flights available by way of Cologne. To save money, you can catch a bus (and sometimes booking in advance means you pay €5 one way). Or you can catch a train and pay from €29 , if you book in advance. Both trains and buses take about the same to travel between the two capital (about 4 ½ h).

Flights from Berlin to Prague 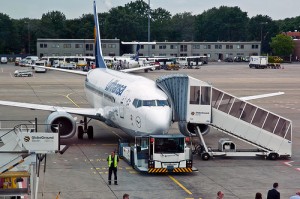 There are two airports serving Berlin and both offer connections to Prague, via Cologne , Warsaw or other European hubs.

Schönefeld (SFX) is the base of low cost carriers serving Berlin and also gets a lot of traffic from Central-Eastern Europe. It is hub for EasyJet and GermanWings. The airport will be merged into Berlin Brandenburg Airport in early 2013, so plan accordingly. Flights to Prague are operated by GermanWings and they connect via Cologne. In mid-September 2012, the single fare starts at €90.

Tegel International Airport (TXL) is the main airport serving Berlin. It is hub for Air Berlin, Germania and GermanWings. In early 2013, Tagel is supposed to close and Berlin Brandenburg Airport will take its place. Flights to Prague are operated by LOT via Warsaw , Swiss via Geneva and several other companies, all with connections in various European capitals. In mid-September, the single fare starts at €247 on LOT.

Buses from Berlin to Prague

Student Agency Bus also operates direct luxury buses between Berlin and Prague. Youngsters (under 26) and senior (over 60) benefit from discounts and so do students with valid IDs. Passengers are allowed to carry one hand luggage and one standard luggage in the luggage compartment (other luggage costs €8 per piece). Single fares start at €30.60 (discounts for RT tickets). There are daily departures from Prague at 7:30 a.m. and 5:30 p.m. and there are also additional buses on Wed, Mon and Fri. The travel time is about 5h. All buses have toilets on board. Hot drinks are included in the price and each seat has radio player.

Trains from Berlin to Prague 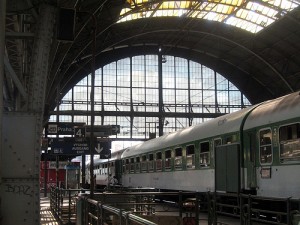 Bahn.de lists all connections by train between Berlin and Prague. The direct train takes 4h 40 min and there are departures almost every 2 h from Berlin. If booked in advance, the single savings fare is €39. The standard fare starts at €63.80.

On the way back, catch the direct trains from Prague on the same schedule (about every two hours). The single fare starts at €29 if booked in advance.

Driving from Berlin to Prague

Both Germany and the Czech Republic are part of EU and Schengen Area, which means you won’t be paying surcharges for taking a rental car across the border. However, make sure to ask the rental agency if you can take the car across borders.

The shortest route between Berlin and Prague is 356 km on A13 and E55 and takes about 4 h. Please note that the route has tolls.