Getting from Copenhagen to Oslo 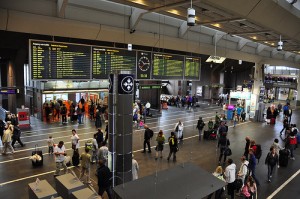 Many tourists choose to visit all the Scandinavian capitals during a single trip; which means they also need to get between them fast, easy and cheap. Getting between Copenhagen – Denmark’s capital – and Oslo – Norway’s capital – by land requires you to cross Sweden, which means you can also plan to spend some time here.

Copenhagen is well known for its nightlife, cultural scene , shopping opportunities and museums. It’s a lively city and a pleasure to visit.

Oslo is the third largest city in Scandinavia and is the most expensive city in the world to live in (and visit). There are interesting buildings to visit and museums to check out. Spend some time in the parks or take a walk in the forest.

Copenhagen is served by Kastrup Airport (CPH) , which is the main international airport serving the capital of Denmark. It is located only 8 km from the city center and is hub for many airlines, including: Norwegian Air Shuttle, Scandinavian Airlines, Thomas Cook Airlines Scandinavia and TUIfly Nordic. The easiest to get to/from the airport is by train.

Olso is served by three airports but most flight from Copenhagen land on Gardermoen Airport (OSL) , which is the main airport serving Norway’s capital. It is hub for many airlines, including Scandinavian Airlines, Norwegian Air Shuttle, Thomas Cook Airlines Scandinavia and TUIfly Nordic. High speed trains, regular trains and buses are available to get to/from the airport. Flights to Gardermoen from Copenhagen are operated by Norwegian Air Shuttle and Scandinavian Airlines.

Starting with July 2012, there are also flights from Copenhagen to Moss Airport, Rygge (RYG) , which is also an international airport, but it’s preferred by low cost carriers. It is located 60 km from the capital , to which is connected by trains and buses. It is hub for Ryanair. Flights to Rygge from Copenhagen are operated only by Danish Air Transport).

The flight from Copenhagen to Gardermoen takes 1h 15 min and the single fares start at €62 in late June 2012 (on Norwegian). A return flight during the same period starts at €135. The same fares apply in mid-October 2012, too.

Trains from Copenhagen to Oslo

Both SJ – the largest train operator in Sweden – and Bahn.de – the German train operator – list the train between the two cities, but only on SJ you can find the prices , too.

Buses from Copenhagen to Oslo

Driving from Copenhagen to Oslo

You can rent a car and drive the 607 km (shortest route) between Copenhagen and Oslo. The route passes through Sweden, so you need to ask the rental company whether you can take the car across borders. Norway is not part of the European Union – like Denmark and Sweden – but is part of the Schengen area, which means you shouldn’t pay surcharges or have problems crossing the border in a rental car.

The travel time on E20 and E6 (shortest route) takes about 6 ½ h but it does depend on the traffic (so take into account more like 7 ½ h drive time plus stops along the way).