Getting from Liverpool to Isle of Man 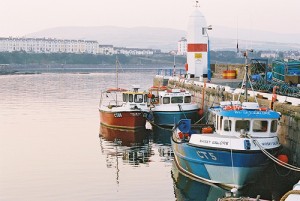 The Isle of Man is a British Crown dependency, located in the Irish Sea, between the islands of Great Britain and Ireland. It has its own government and parliament and is an associate member of the European Union.

Being an island, there are only two ways to get from Liverpool to the Isle of Man: by air or by water. The fares are similar (for foot passengers) but you might end up paying bookings fees when flying (so take that into account, too).

Flights from Liverpool (airport code: LPL) to Isle of Man

Liverpool John Lennon Airport (LPL) serves the city of Liverpool and the North West of England. Hub for EasyJet and Ryanair, the airport handles domestic flights as well as flights to European cities.

Isle of Man Airport (IOM) is located in Ronaldsway, near Castletown on the Isle of Man. It is not hub for any airline and receives a handful of flights from Ireland, Great Britain and other European countries.

Flights between Liverpool and Isle of Man are operated, year round, by EasyJet and Flybe. The flight time is 40 min. In the summer of 2012, expect to pay from £35 one way on EasyJet, but do remember that additional fees (booking fee, checked baggage fee) might be added to the price.

Make sure to book your ticket about 4 to 8 weeks in advance in order to get the best rates. If you need more luggage than the accepted carry on can handle, purchase the checked baggage before going to the airport (to cut down the fees).

Ferries from Liverpool to Isle of Man

The ferries between Liverpool and Isle of Man are operated by the Steam Packet Company . Depending on when you plan to travel, special fares may be available. At the time the article was written, a single ticket between the two ports costs £34.50 for an adult (transaction fees applied only when you pay with credit card).