Getting from Istanbul to Greece 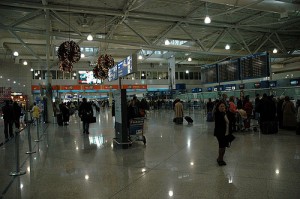 Turkey and Greece , once foes, now friends and always bordering each other…two countries which have similar cuisines and cultures. In some parts of Turkey you can swear you are actually in Greece…and the opposite is exactly the same. Thanks to being so close to each other, many travelers plan to visit both countries during their vacations. Thankfully, there are plenty of ways to travel between Istanbul and Greece. Choosing the right one for you depends on your budget and how much time you plan to spend traveling.

Flights from Istanbul to Greece

Turkey has several international airports but only some of them offer direct flights to Greece’s airports .

Direct fights between Istanbul and Athens are operated by Olympic Air, Aegean Airlines and Turkish Airlines. The flight time is 1h 20 min and the cheapest ticket is provided by Olympic Air (single fare: €71 during the shoulder and high tourists seasons 2012).

Direct flights from Istanbul to Thessaloniki are operated only by Turkish Airlines. The flight time is 1h 25 and fares are more expensive than the fares to Athens (single fare: €133 during the shoulder and high tourist seasons 2012).

There aren’t any direct flights between Antalya and Athens or Thessaloniki. Neither there are from Izmir or Bodrum to Athens or Thessaloniki. And if you want to fly from Turkey to one of the Greek islands, you’ll most likely go via Athens. So, your best bet is to plan your flight from Istanbul to Athens and then continue by ferry or domestic flight to your destination in Greece.

Trains from Istanbul to Greece

Unfortunately, as of February 2011, due to the economic state of Greece, all international trains to/from the country have been canceled, the Istanbul –Thessaloniki-Athens train including.

Ferries from Istanbul to Greece 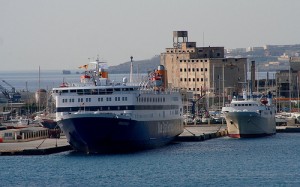 There are no direct ferries between Turkey and mainland Greece , but you can take the ferry from Turkey to some Greek islands and continue the journey via domestic Greek ferry or by plane. Of course, in Turkey, you can travel from Istanbul to the ports by bus (or train and bus).

Here are the possible routes:

You might also want to read about Getting from Turkey to Santorini , just in case you plan to do some island hopping on the way to Greece.

Buses from Istanbul to Greece

Once upon a time there were many companies operating between Turkey and Greece, but not anymore. Still, there are departures and you can get a bus from Istanbul and get off in Athens.

Metro Turizm is one of the companies operating on the Istanbul – Athens route. They run a bus per day, which departs Istanbul at 6 p.m. and gets to Athens 16 hours later. The single fare is either 140 Turkish Lira / €59 or 150 Turkish Lira / €64.

>>read more about Getting from Istanbul to Athens

Driving from Istanbul to Greece

You can rent a car in Istanbul and drive to Greece, but make sure to ask whether you are allowed to take the car across the borders.

According to Google Maps, the shortest route between Istanbul and Thessaloniki is on E9. The total distance is about 600 km, which can be covered in about 7 hours.

The shortest route between Istanbul and Athens is by sea and land (with 3 ferry crossings). However, you can also choose the 1100 km route via A2/E90 and E75, which is by land only and takes about 12 hours. Of course, plan some stops along the way (in Thessaloniki , for example).