Getting from Istanbul to Ephesus 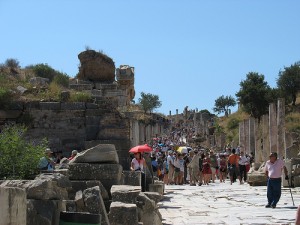 Ephesus (Turkish: Efes) is one of Turkey’s major tourist attractions. It was a Greek town, later conquered by the Romans and which gained its popularity thanks to being home to the Temple of Artemis, one of the Seven Wonders of the Ancient World. It is one of the best preserved Roman Mediterranean cities in Turkey.

Ephesus is located near present-day Selcuk in the Izmir Province. The closest airport to Ephesus is İzmir Adnan Menderes International Airport (ADB). The closest railway station and bus terminal are also in Izmir.

The hassle-free and affordable way to get from Istanbul to Ephesus is by bus to Selcuk and then on foot to the ruins. But the travel time is long (11h) and in case you are in a hurry there’s always the plane. The flight time is 1h and from Izmir airport there’s a train service all the way to Selcuk. And it’s not that expensive to fly, either.

The closest airport to Ephesus is İzmir Adnan Menderes International Airport (ADB), located about 18 km from the city center of Izmir and 60 km from the archeological site of Ephesus. The airport is hub for IZair, SunExpress and Onur Air.

Once in Izmir, you can either rent a car and drive to Ephesus or take the train to Selçuk. There are six trains per day, departing from Izmir train station and from the Airport train station. The travel time to Selçuk is 1 h (from the airport).

Read more about:
>>Cheap flights to Istanbul
>>Airports in Turkey

Buses from Istanbul to Ephesus

Metro Turzim is one of the companies operating buses from Istanbul’s Büyük Otogar (main bus terminal) to Selcuk’s bus terminal, the closest bus terminal to Ephesus. There are two buses per day departing Istanbul at 9:30 p.m and 11:30 p.m. The travel time is 11 h. The fare is either 58 Turkish Lira / €24.50 or 65 Turkish Lira / €27.40, depending on the type of ticket.

Once in Selcuk you can walk the 4 km to the ruins.

Trains from Istanbul to Ephesus

The train station for Ephesus is Selcuk. The ruins are within walking distance of Selcuk (about 4 km). But there isn’t a direct link from Istanbul to Selcuk and you need to change trains in Izmir.

2) Izmir to Selcuk by train: there are six trains departing Izmir each day (first at 8:09 a.m. and the last at 7:10 p.m.). The travel time is about 1h 20 min. You can check the timetable and fares here (requires a username/password).

Driving from Istanbul to Ephesus

You can rent a car and drive from Istanbul to Selcuk, but plan to walk from the city to the ruins. The driving distance is 629 km on D565 and can be covered in about 8 ½ h. But make sure to plan some stops along the way.