Getting from Manchester to Edinburgh 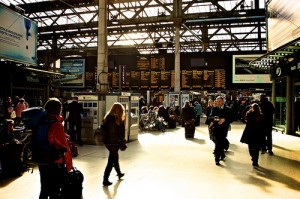 Edinburgh is the capital of Scotland and a very popular city among travelers of all ages. Whether you want to attend interesting festivals, enjoy the history and the sites or taste the “weird”-ish local cuisine, Edinburgh is the place to be.

Manchester is one of the major cities in England, with good connections to the rest of the country of continent. If you need to travel between Manchester and Edinburgh, there are plenty of options: plane, bus, train and car.

The cheapest option to get between Manchester and Edinburgh is the bus (fares from £11 one way). The fastest option is the plane but, of course, the fares are higher (but not higher than train fares).

Manchester Airport (MAN) is the third busiest airport in the UK and the largest outside of London. It is hub for Flybe and handles flights within the UK, Europe, North America, Africa and the Middle East.

Edinburgh International Airport (EDI) is the busiest airport in Scotland and the sixth busiest in the UK. It is located about 10 km from the city center. While not a hub for any airline, the airport handles flights within the UK, Europe and to North America and Africa.

Flights between Manchester and Edinburgh are operated by BMI and Flybe. The flight time is an hour. In late May 2012, expect to pay from £45 one way on BMI. Slightly higher fares are available from Flybe. Similar prices are available for flights in mid-July 2012 (from £49 one way on the same carrier).

Trains from Manchester to Edinburgh

Direct trains connect Manchester Piccadilly station to Edinburgh’s station. The travel time is about 3 ½ h . There are departures every 2 to 3 hours daily. Single fares start at £59.90. You can also choose to change trains in York but the fare can be higher in some cases (and the travel time increases).

Details, schedules and prices can be found here .

Buses from Manchester to Edinburgh

Chorlton Street Coach Station serves Manchester and is located close to the city center. There are two companies to choose from when planning to travel between Manchester and Edinburgh:

Driving from Manchester to Edinburgh

You can rent a car in Manchester and drive the 216 miles to Edinburgh via M6. The travel time (estimated) is about 4 hours but does depend on the traffic.