Getting from Manchester to Dublin 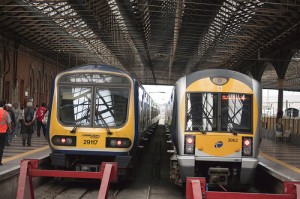 Dublin , the capital of Ireland, is the most important entry-point for the foreign visitors. The city is known for its nightlife and tourist attractions. With a center small enough to be tackled on foot, Dublin has made it to the traveler’s destinations list a long time ago.

The second largest city in the UK, Manchester is well connected to the rest of the country and the near-by European countries. Home to a large airport, the city has been quite popular among travelers for a long time.

The cheapest option to travel between Manchester and Dublin is by bus (you won’t even need to get off the bus for the ferry crossing). Other good option is the train and ferry, but the price is higher. For a fast option, choose to fly but pay attention to when you book the flight (about 4 to 8 weeks prior to departure is ideal).

Flights from Manchester to Dublin

Manchester Airport (MAN) is the third busiest airport in the United Kingdom and is the largest airport outside of London. Hub for Flybe, the airport handles flights within the UK, to other European cities, to Africa, Middle East, Caribbean and North America.

Dublin Airport (DUB) is the busiest airport in Ireland and is located about 10 km from the city center. Hub for Aer Lingus, Air Contractors, CityJet, Orbest Orizonia Airlines , Ryanair and Thomson Airways, the airport handles domestic flights, flights to other European cities, to Middle East and North America.

Flights between Manchester and Dublin are operated by: Aer Lingus and Ryanair. The flight time is an hour. In mid-May 2012, expect to pay from £20 one way on Ryanair. Slightly higher fares – from £32 one way – are available in mid-July 2012.

However, do remember that you need to consider the carry on limitations (and fees if the bag ends up as checked baggage), the booking fees and the fact that you need to book in advance in order to get a good deal.

rains and ferry from Manchester to Dublin

It is possible to travel overland between Manchester and Dublin, by using a combination of trains and ferry. National Rail offers an easy option for this route:

Another option is to travel through London. First, take the train to London and then travel by train and ferry all the way to Dublin. It’s a more expensive and longer route, though.

>>read more about Getting from London to Dublin

Buses and ferry from Manchester to Dublin

There is also the possibility to take a direct bus from Manchester to Dublin. Of course, it involves the ferry crossing, but you don’t actually need to get off the bus.

National Express offers two departures per day. The 7:45 p.m departure from Manchester is direct and arrives the next day at 6:30 a.m. in Dublin. The single fare is £42. The second departure, at 8:15 p.m. , requires a change in Liverpool , but you’ll arrive at the same time in Dublin and the fare is also the same.

Driving from Manchester to Dublin

You can rent a car in Manchester and drive to Dublin. But you need to ask whether you are allowed to take it over the border and need to consider the ferry crossing fees.

The ferry crossing is via the Holyhead – Dublin route. Ideally, you should spend 5 hours traveling (including the ferry crossing) but you need to time your arrival at the port with the next ferry departure. The ferries are operated by Stena Line and the fares for an adult and a compact car start at £129.00, one way.