Getting from Panama to Colombia 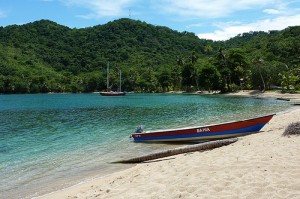 Colombia is the only country in South America with coastlines on both the Pacific Ocean and the Caribbean Sea. Border by Panama to the north, Colombia is also an important stop for those who travel to South America. The city offers both spectacular mountains and golden beaches , making it a lovely destination for many activities.

Getting from Panama to Colombia does require a bit of planning. There aren’t buses connecting the two countries as the Pan-American Highway stops at Darien Gap, a swampland and forest which separates the two countries. So, you are left with either flying or taking the boat.

The hassle free way to get between Panama and Colombia is to book a flight from Panama City to either Bogota or Cartagena. It will cost from US$345 one way (connecting flight). The scenic way would be to travel to Puerto Obaldia and then catch a ferry to Capurgana (in Colombia) and from here travel by plane or bus further into the country. This is the cheapest option, however. Or you can sail between the two countries but expect quite a lot of hassle planning it and prices comparable to the airfare.

Flights from Panama to Colombia

You can catch a flight from Panama City into Cartagena or Bogota.

Flights arrive / depart to / from Tocumen International Airport (PTY) in Panama City , which is located about 24 km from the city center. It is hub for Copa Airlines.

>>book flights to Panama and read about Airports in Panama

Ferries from Panama to Colombia

The cheapest way to travel from Panama to Colombia is by ferry from Turbo to Capurgana. The single fare is about US$28 .

If you prefer a smaller boat, catch it from Puerto Obaldia to Capurgana, for about US$11.25 one way. The travel time is one way. From Capurgana you can get to Medellin by plane.

There are ferries from Panama to Cartagena and Bogota but the price is around US$350 one way, which competes with the airfare . However, it’s a scenic boat ride which takes about 5 days and is getting very popular. The boats sail through San Blas Islands, which are very beautiful. You cannot book in advance and you are left with doing the research locally.