Getting from Dusseldorf to Cologne 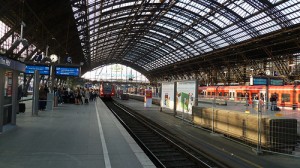 Dusseldorf is located on the River Rhine and is famous for its nightlife, shopping and events. It is also home to Düsseldorf International Airport (DUS), the third largest airport in Germany. Also, Airport Weeze (NRN) serves the city and is used by European low cost carriers. Many travelers choose to fly here and then connect to the rest of Germany rather than flying into the larger Frankfurt or Munich airports

Cologne is also located on the River Rhine and is the fourth largest city in Germany. It is a very popular city among travelers, well known for the Kölner Dom, the traditional neighborhoods, the Hohenzollern Bridge, the parks and the churches. Cologne Bonn Airport (CGN) is an important hub for low-cost carriers TUIFly and Germanwings , offering excellent connections to the rest of Europe and other continents.

>>read more about the Airports in Germany

If you don’t want to rent a car to travel between Dusseldorf and Cologne, then the other option is the train. There are fast and slow trains on this route running every half an hour and the fares start at €10 one way.

Trains from Dusseldorf to Cologne

Deutsche Bahn operates trains between the two cities. The standard fare is €11.50 on the IC trains and €17 on the ICE trains. However, the travel time is the same. There are also slow trains which take 51min but are not operated by Deutsche Bahn (and the fare is not available on the site). Depending on the time of the day, fast trains run every half an hour to three hours.

Driving from Dusseldorf to Cologne

You can rent a car in Dusseldorf and drive the 44 km (on A57) to Cologne in about 40 min. If you want to stop by Leverkusen, choose either A3 or A59 with similar driving time.