Getting from Vietnam to Cambodia 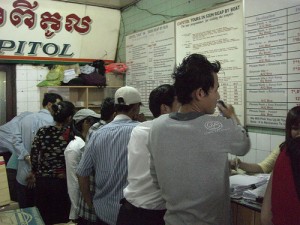 Both Vietnam and Cambodia are located in Southeast Asia and both are very popular among travelers, including RTW-travelers and backpackers. In fact, getting from Saigon (Ho Chi Minh City) to Cambodia by bus is the typical way to travel between the two countries.

December , January and February are the best months to plan a visit in both countries weather-wise. Needless to say , these are the crowded and more expensive months, too. If you want to avoid the crowds, you can consider traveling during the rainy season, but do remember that some roads aren’t exactly in good shape to be used at that time.

Taking the bus between Saigon (Ho Chi Minh City) and Phnom Penh is a very popular way to get between Vietnam and Cambodia. It’s also cheap and takes about 6 hours. It’s also possible to travel by bus all the way to Siem Reap.

Flights from Vietnam to Cambodia

There are airports in Cambodia that receive international flights: Phnom Penh and Siem Reap.

Phnom Penh International Airport (PNH) is the largest in the country but it’s not hub for any airline and receives flights only from Asian cities.

Siem Reap is served by an international airport (REP), which is the second largest in the country, and is hub for Cambodia Angkor Air and TonleSap Airlines. It also receives only flights from Asian cities.

>>read about getting from Ho Chi Minh City to Siem Reap

>>read about getting from Ho Chi Minh City to Phnom Penh

Buses from Vietnam to Cambodia

There are two by land legal entry points between Vietnam and Cambodia. The border crossing at Moc Bai remains the best bet, except during flooding. This border crossing is used by buses going between Saigon (Ho Chi Minh City) and Phnom Penh (and further to Siem Reap).

Several buses operate daily between Saigon and Phnom Penh. The travel time is about 6 hours and the time includes the ride across Mekong river. Rates are around US$10-15 for a single journey. Try to avoid the cheapest buses (US$6-7 one way) because the conditions of traveling are typically bad.

There’s also a direct bus service between Saigon and Siem Reap and goes through Phnom Penh. The fare is US$18 one way. Alternatively you can travel by bus to Phnom Penh and then take a boat for the rest of the journey (but that’s the more expensive alternative as the ticket is US$35 one way for the boat ride and takes 6 h).