Getting from Panama City to Bocas del Toro 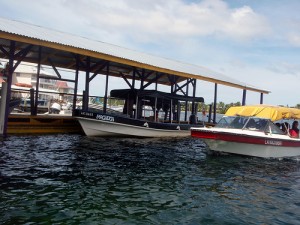 Panama City , the capital of Panama, is also the transportation hub in the country. If you travel from abroad, this is where you’ll land and from where you’ll depart to visit the rest of the country. The city offers great shopping and even if you don’t speak Spanish, you’ll be happy to know that some English is spoken here.

Bocas del Toro is located in the Caribbean West region of Panama. The city is small and can be tackled on foot. Other good options include renting a bike or a scooter. One of the activities Bocas del Toro is popular for is scuba diving, but of course you can also soak up the sun and enjoy the beach related past time.

The cheapest option for travel between Panama City and Bocas del Toro is the bus via Almirante, followed by a ferry or a water taxi. Another option is the plane, but airfare costs about 3 times more than the bus fare.

While your international flight will land on Tocumen International Airport (PTY) in Panama City, the flights to Bocas del Toro depart from Gelabert/Albrook Airport (PAC). The airport is located just 1.5 km from the city center and the majority of the flights operated here a domestic.

Flights between Panama City and Bocas del Toro are operated by Aeroperlas and Air Panama. The rumor is that both companies will start operating flights from Tocumen as well, starting with June 2012.

You don’t be able to find the flights via large search flight engines (i.e. Kayak), so you are left with checking the airlines directly. Expect to pay US$80 one way on either Air Panama or Aeroperlas. The flight time is an hour.

>>book flights to Panama and read about Airports in Panama

Buses and ferries from Panama City to Bocas del Toro

Your best bet is to show up at the bus terminal a day or two before the departure and get your ticket.

You can rent a car in Panama City and drive to Almirante and then transfer to ferry or water taxi to Bocas del Toro. The distance is 508 km and the drive time is about 8 h.