Getting from Frankfurt to Berlin 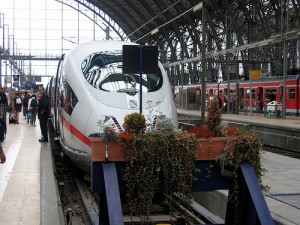 Frankfurt is the business and financial center of Germany and an important travel hub in the country, offering connections to the rest of the world. The downtown area is very popular among travelers and its off the beaten track neighborhoods still retain the old charm.

Berlin is a city filled with history, known for the remains of the Wall and home to Branderburg gate.

Both are important and interesting cities and traveling between them is an absolute delight. And there are plenty of choices , depending on your budget.

The cheapest option for traveling between Frankfurt and Berlin is the bus. The fares start at €33 one way (but they can be higher if you don’t book in advance) and the travel time is 9 h. A more expensive, but much faster – 4 to 5 h – option is the train. Book in advance and you can pay just €59 one way.

Flights from Frankfurt to Berlin

Frankfurt Airport (FRA) is a major international hub , located 12 km from the city center. It is hub for Condor Flugdienst and Lufthansa and is the busiest airport by passenger traffic in Germany.

Berlin is served by three airports: Tegel International Airport (TXL), Schönefeld (SXF) and Brandenburg (scheduled to open in June 2012). When the airport opens, Schönefeld is scheduled to close (as of August 2012).

Tegel International Airport (TXL) is the main airport serving Berlin and is located 8 km from the capital city. The airport is hub for Air Berlin and Germania and is the fourth biggest airport in Germany. It is also a focus city for Lufthansa.

Flights between Frankfurt and Berlin are operated by: Air Berlin (Tegel) and Lufthansa (Branderburg, Tegel). The flight time is 1h 15 min.

Trains from Frankfurt to Berlin

Bahn.de operates trains (ICE and IC) between Frankfurt and Berlin. The travel time is between 4 h and 5 h. Book in advance (about 1 month) and you can find the cheapest fare of €59 one way (savings fares) rather than the standard fare of €118. The fares do depend on the hour of departure and route. Some trains connecting the two cities are direct, while some require a change in Hannover.

Buses from Frankfurt to Berlin

Berlin Linien Bus operates buses between Frankfurt and Berlin and offers the possibility to book the ticket online. Book in advance and you pay only €33 one way between the two cities. The bus leaves Berlin at 7:06 a.m and arrives in Frankfurt 9 hr later. On the way back, catch the bus in Frankfurt at 8 a.m. and by 5 p.m. you’ll be in Berlin. The schedule and prices are here (pdf).

Driving from Frankfurt to Berlin

Driving in Germany is an absolute delight. The roads are in excellent condition and the drivers obey the rules. Especially if you are not traveling alone, renting a car here can be an excellent way to get from one city to another.

There are several routes to choose from when getting from Frankfurt to Berlin and, if you use Google Maps, you can get accurate traffic information. On the shortest route – 547 km on A4 and A9 – you can cover the distance in about 6 h.