Getting from Istanbul to Antalya 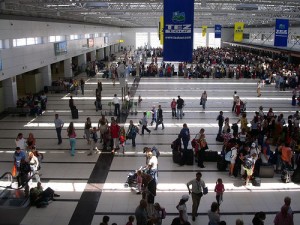 Antalya is the largest city on the Turkish Mediterranean coast and the main gateway into the Turkish Riviera. From April to October it is crowded with tourists looking to soak up the sun. Although the city’s airport gets plenty of low cost flights from various cities in Europe, many travelers arrive in Antalya by way of Istanbul , Turkey’s largest travel hub and where most of the international flights land.

The cheapest option to get from Istanbul to Antalya is the bus. But the travel time is about 12 hours. If you want to travel faster, the flights are not that expensive (but you need to consider the time and money spent for the transfer to/from the airports).

Antalya Airport (AYT) is located about 13 km from the city center and is one of the three major airports serving the Turkish Riviera. It is hub for Freebird Airlines, Pegasus Airlines, Sky Airlines, SunExpress and Turkish Airlines. The airport handles both domestic and international flights.

Istanbul is served by two airports:

Flying from SAW into Antalya is slightly cheaper than flying from Ataturk. In mid April 2012, expect to pay from €22 one way on Pegasus from SAW and from €29 one way on Onur Air from Ataturk. The flight time is the same, though, regardless of which airport you fly out of.

By mid June 2012, the prices do increase and flying out of SAW remains cheaper (€30 one way on AnadoluJet vs €40 one way from Ataturk on AtlasJet).

You have to remember that flying on low cost airlines requires you to be quite attentive to the fares and how they fluctuate. Still, generally speaking, booking 4 to 8 weeks in advance means you get the best fares.

Buses from Istanbul to Antalya

Metro Turzim is one of the companies operating buses from Istanbul’s Büyük Otogar (main bus terminal) to Antalya’s bus terminal. There are seven departures per day, with the first being at 10 a.m. and the last at 11 p.m. The travel time is 12 h and the fare 55 Turkish Lira / €23.20 or 60 Turkish Lira / €25.30, depending on the type of ticket.

Has Turzim Bus also operates on this route but their website seems to be full of problems and it’s impossible to view the routes or prices*.

Trains from Istanbul to Antalya

While there isn’t a direct train link from Istanbul to Antalya, there are two options to consider.

2) Izmir to Antalya by bus: just show at the otogar and tell your destination. There are plenty of companies operating on this route but do remember that the fares depend on the company.

1) Istanbul to Izmir by train (see details above)

2) Izmir to Denizil by train: there are 3 departures per day from Izmir, the first being at 8:09 a.m. and the last at 3:30 p.m. The travel time is about 4 h 15min. You can check the timetable and fares here (requires a username/password).

3) Denizil to Antalya by bus: just show up at the otogar and tell your destination. You can choose among regular buses and mini buses (dolmus)

Driving from Istanbul to Antalya

You can rent a car in Istanbul and drive the 727 km to Antalya (via D650) in about 12 hours. Make sure to plan some stops along the way.

Note:*at the time the article was written