Germany is a land of regional differences. This trip aims to highlight these differences giving a taste of the north, south, east and west. The point is to see the different faces of the country at the same time as seeing the postcard highlights. You will get castles and churches, museums and markets in these two weeks. Be sure to sample the foods and beers in each the different regions. Although there are plenty of nature and hiking opportunities in Germany this is primarily a city tour for seeing urban German society. Two weeks is enough to get a taste of each place and yet enables a slow enough trip to not get overwhelmed.

This itinerary is a circle based on a round trip to Frankfurt airport, though Berlin or Munich would work as well. An open jaw ticket saves a travel day at one end though not required. Germany has an excellent train system for transport between the cities and for daytrips. For all of these places, picking a hotel near a tram/metro stop will make your days easier. 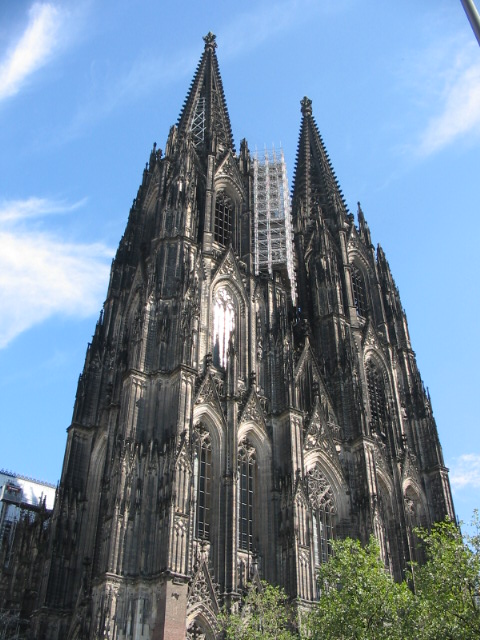 Take a train from Frankfurt Airport to Cologne. The impressive and enormous Kölner Dom (Cologne Cathedral) is right out front of the train station. There can’t be much better first impression of the country than that. Cologne is a big city with shopping and activities to match.

Quick search for hotels in Cologne:

Tall Towers and Short Beers
Take a tour of the cathedral and climb the tower for views. If you are at all into beer, find a bar that does kölsch, the local type of beer served in small glasses. Gaffel and Früh are well known breweries of it. There are several museums near the cathedral and a chocolate factory with tour in town if you are so inclined.

Rhein Boat Tour
The “must do” day-trip in this area is the Koblenz-Bingen section of the Rhein river. This stretch has a number of castles along its bank for medieval charm. Take the train to one end and ride the ship to the other. Check out St. Goar in the shadows of the Lorelei for lunch.

Explore Bonn
Bonn is close to Cologne but presents a different face of the area. This university town was the capital of West Germany during the split up of the country. The birthplace of Beethoven is here as well as one of Germany’s oldest churches. 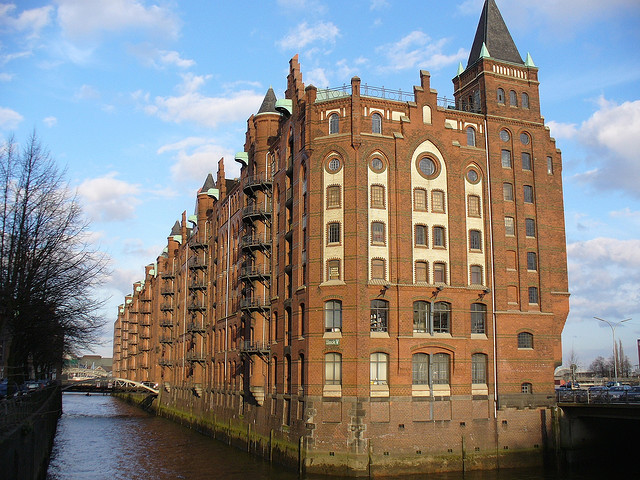 Again get on the train and head north to Hamburg. A daytime fast ICE train ride takes about 4 hours to the inland port city on the river Elbe. Hamburg was once part of the Hanseatic league and retains much of its mercantile feel.

Quick search for hotels in Hamburg:

On the Banks of the Elbe
The Old Elbe Tunnel (Alter Elbtunnel) is a pedestrian tunnel near Landungsbrücken that goes under the river and dates from 1911. Nearby on the other side of Landungsbrücken is the historic warehouse district(Speicherstadt) that is now home to several museums and Hafen City. Check out more of the waterbound nature of the city with either a harbor boat tour or one on the Alster lakes. For a bit of greenspace, explore the Planten un Blomen park or visit the Tierpark Zoo.

Markets
Honor the mercantile history and seek out the outdoor markets. The Isemarkt, under the U3 train line at Hoheluftbrücke, is the longest in Hamburg and opens on Tuesday and Friday mornings. If you happen to be in Hamburg on Sunday morning, the Fischmarkt is worth getting up early for (it starts at 5am in the summer).

Reeperbahn
Reeperbahn street is known as a red light and party district. Clubs and nightlife with anything you can imagine. There is even a Beatles connection if you are so inclined. 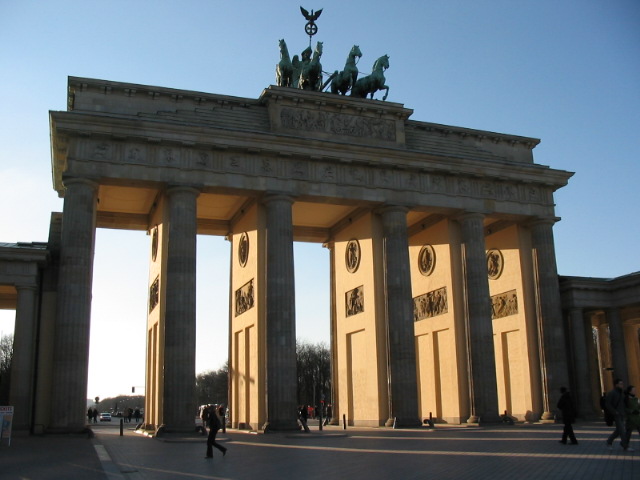 Another few hours on the train gets you to Berlin. I like staying on the Eastern side of the center of the city, but definitely make sure you are near a subway stop. Berlin is an enormous place and has so many little nooks and crannies to find. This is an overview of the big tourist highlights, but get out and look for the smaller jewels too. You could really spend a whole trip around Berlin, so this is but a small taste.

Quick search for hotels in Berlin:

Walk Around
There is so much recent history in Berlin. The first day I really recommend taking a walking tour. Pick your length from several hours to all day, but it gives a good overview of the center of town. Check out the famous “Walking Man” cross walk signs. Find a Currywurst stand for lunch.

A Sad History
Berlin with its wall was the focal point of the split between East and West. Check out the Checkpoint Charlie Museum as well as the few pieces of the wall that remain. There is a small window in the middle of a square in the Humboldt University campus that looks down into an empty room of shelves representing all of the books burned during a Nazi organized action against intellectualism.

Day Trip : Potsdam
A short train journey outside of Berlin is Potsdam. There the palace and gardens of Sanssouci was the Prussian answer to Versailles. The best time to see the flowers and fountains is while they are in bloom, so late spring through summer.

Museum Island
You hopefully walked around this on your walking tour, so go back and take in a museum or two. The Pergamon with it’s replica temple is my pick and there are several art museums as well. The island in the Spree is also home to the Berlin Cathedral. If you haven’t had enough of museums there are plenty more around the city.

City Sights
Kurfürstendamm is a shopping street in the west of town. A church ruined by the war is left in its ruins as a reminder is also on this street. Berlin has a well known zoo and park for outdoor enjoyment. On the eastern side of things is the Hackescher Markt, a group of interconnected shops in courtyards.

The iconic sight of Berlin is the Brandenburger gate at the split between East and West in the center of the city. Nearby Potsdamer Platz is a revitalized entertainment, nightlife and shopping area built in the no man’s land where the wall used to be. Several theaters and restaurants are under a large upsweeping pavilion. 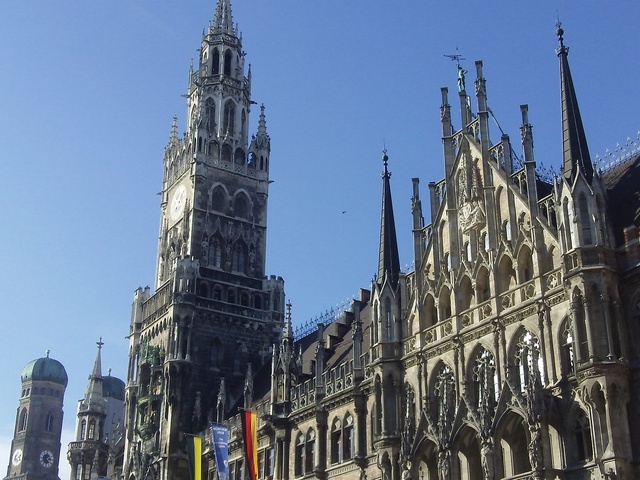 Get on a night train from Berlin to Munich. Munich is the capitol of Bavaria and what most Americans think of when they think of Germany, Lederhosen, Beerhalls and Oktoberfest. While it has all of these things, there is more to the city. It is near the Alps, so you have now traveled nearly the full height of the country and seen both the coastal lowlands and the mountains.

Look for a hotel near a tram or subway stop to get around easily, though try to avoid the area immediately around the main train station.

Quick search for hotels in Munich:

Day Trip: Fairytale Castle
Must-do daytrip is to Castle Neuschwanstein. The fairytale castle that was the basis for Disney’s Cinderella castle is on so many postcards (and rightly so). There are numerous day trip buses from Munich or the town of Füssen is two hours by train and a few miles from the Castle. If you can be there on your own schedule, add a visit to the Hohenschwangau Castle which is the yellow castle just down the hill.

City Walk
The Gothic Rathaus(City Hall) and nearby Frauenkirche(the cathedral) are in the very center. There are several city gates around the edges still standing like the Isartor. For outdoor enjoyment, check out the Viktuellenmarkt in the center or out a bit further to the English Garden or the Theresienwiesen, the fields where Oktoberfest is held.

History and Museums
The Deutsches Museum is Germany’s largest technical and natural history museum. It nearly fills an island in the Isar river. Even if you can’t read German, the displays are still amazing to look at. Airplanes share the building with animals and more. Take a look for the people that surf the river nearby.

Just as Berlin has the wall, other German cities bear marks from the Holocaust time. The Dachau concentration camp is reachable with public transit and worth some time to experience and “never forget”.

Beer and Sausage
After a long day sightseeing go have a Bavarian beer or several in a beer hall. Although the Hofbräuhaus is the most famous, I like the Augustiner Bierkeller near the train station. If you are there in the summer it is worth sitting in the beer garden outside. Look for a Weisswurst meal made of white sausages with sweet mustard and a pretzel. This is typically Bavarian and is often eaten as breakfast.

Hamburg photo by Metro Centric; all other photos by Andrew Couch & may not be used without permission